Searching for sharks and rays of Sharjah’s Pearl

Mona Möller and the marine conservation team from Emirates Nature-WWF survey unique seascapes of the Sir Bu Nair Island in search of sharks and rays – read on to learn what they found 55 baited video deployments later.

Sir Bu Nair is a small island in the Emirate of Sharjah, UAE, located 65 kilometres off the coast of Abu Dhabi. Even though this pearl-shaped island is only 13 square kilometres, it is of great significance to the region. Once used as a sheltered staging post for fishermen and pearl divers, Sir Bu Nair has long been an integral part of the UAE’s natural and cultural heritage. In the past, the island’s single well was a vital source of fresh water for seafarers, transforming Sir Bu Nair into an important meeting place during the pearl diving season.

Many decades later, in 2000, the island was designated as a marine protected area (MPA) by the Ruler of Sharjah, His Highness Shaikh Dr. Sultan Bin Mohammad Al Qasimi. It has also been recognised as a Ramsar site, wetland of international importance, and is being considered for inclusion in the UNESCO World Heritage list. This jewel in the UAE’s history is not only considered one of the most pristine marine ecosystems in the region but also acts as an important nesting ground for marine turtles as well as endemic and migratory bird species. Even though this precious site has been protected for nearly 20 years, we still know relatively little about its inhabitants beneath the waves.

To fill this important knowledge gap, the team from Emirates Nature-WWF partnered with the Environment and Protected Areas Authority of Sharjah (EPAA) and a local NGO, Emirates Marine Environmental Group (EMEG), to study the biodiversity and state of marine life around this unique island to help inform future management plans for the MPA. One crucial aspect of this project, which Mona Möller, Marine Programme Coordinator at Emirates Nature-WWF, has been working on is to survey the area for sharks and rays by employing Baited Remote Underwater Videos (BRUVS).

A BRUV consists of a solid metal frame with an attached GoPro underwater camera and a mesh bag filled with food (in this case, fresh sardines), which is attached to a pole in front of the camera and acts as bait. Each BRUV is lowered carefully onto the seabed and left for at least 60 minutes in one spot. To get best possible results, the exercise is then repeated multiple times and across multiple spots, considering many other variables such as weather, season, etc. When everything goes according to plan, sharks and rays in the vicinity will be attracted by the smell of the bait and move close enough to be recorded by the camera. Experts later review the video footage to identify which species inhabit the waters surrounding the Sir Bu Nair Island, and in what numbers. 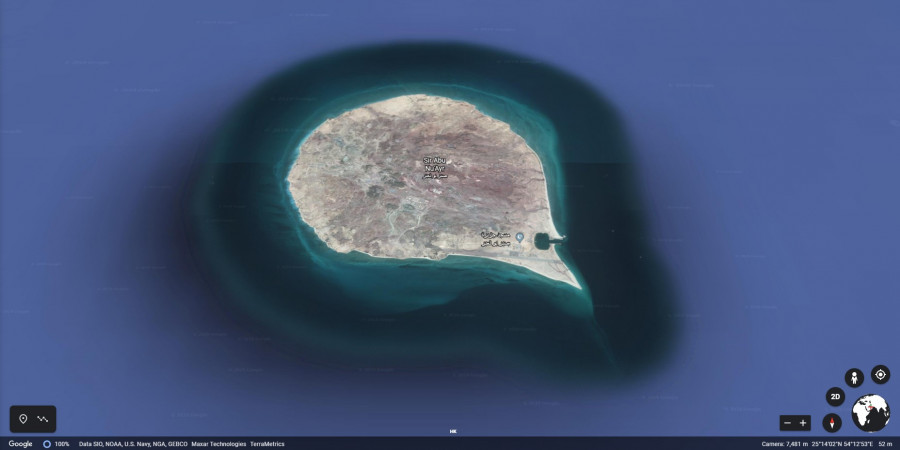 Since January 2019, Mona and other members of Emirates Nature-WWF’s marine team have completed 55 BRUV deployments around the island, with one more survey planned for the winter. Having analysed 60 hours of footage, the team recorded elasmobranchs (sharks and rays) 11 times. The underwater BRUV videos feature two species of sharks – a Blacktip reef shark (Carcharinus melanopterus) and a Sandbar shark (Carcharinus plumbeus) – as well as many different rays.

Mona told us: “Sir Bu Nair island is a unique place, full of marine and terrestrial treasures. I remember being in complete awe as we watched Shortfin devil rays breaching repeatedly while we waited for the timers to go off and indicate it was time to retrieve the BRUVS.”

Some of the BRUV stars included a reticulate whipray (Himantura uarnak) so tempted by the bait that it wrestled with it for 5 minutes and ended up lifting the baited pole and flipping the entire BRUV skywards. Another piece of footage captured a squadron of 12 cownose rays  (Rhinoptera sp.) gliding gracefully in front of the BRUV.

Probably the most valuable discovery of all was a number of Halavi guitarfishes (Glaucostegus halavi), which have also been spotted by the team when diving. Considered as an Evolutionarily Distinct and Globally Endangered (EDGE) species, they are endemic to the region and classified as Critically Endangered  by the IUCN’s Red List of Threatened Species. Found in coastal habitats of the Northern Indian Ocean, Halavi guitarfish – as well as other giant guitarfishes – have been pushed to the brink by intense fishing pressure. Captured in a wide range of fisheries from industrial to artisanal, they are generally retained for their meat and fins, which are highly-valued on the shark fin trade market. With Halavi guitarfish being increasingly rare across its range, this discovery made by Mona and the team gives us a glimmer of hope. With so many fascinating finds, Mona and the team are excited about analysing footage from the third fieldwork and deploying BRUV later this winter – who knows what they will find this time!

Living on the Edge

The Arabian Gulf where the Island is located is a unique body of water shaped by distinctive and extreme conditions, such as temperatures ranging from 11.5°C to 37°C, salinity 37%0-50%0 higher than the global average, relative shallowness, high water evaporation rate, and little rainfall. To survive these extremes, resident organisms have adapted to surviving close to their environmental tolerance limits. As climate change and anthropogenic impacts are expected to increase the pressures on marine and coastal ecosystems, the long-term survival of animals and plants already living on the edge is uncertain in the “business as usual” scenario.

The team’s current BRUV work and the broader coral and fish surveys have confirmed the hypothesis that the Sir Bu Nair Island MPA hosts some of the most resilient coral reefs and fish communities in the whole of UAE – that’s thanks to the site’s unique, remote location and the protection status that has been in place for decades. Understanding the ecology of Sir Bu Nair Island and the interaction of different species – including sharks and rays – with their habitats will be important for the future of UAE’s natural world and the region.

Emirates Nature-WWF and its partners are working hard to ensure a balanced and healthier future for our seas that are needed to sustain all of us. Their work on promoting integrated marine and coastal management in the UAE is a crucial part of that vision to make sure that marine ecosystems continue to function and support human well-being in the long term.

Mona Möller is a Marine Programme Coordinator at Emirates Nature-WWF, which focuses on promoting integrated marine management, spearheading regional collaboration to conserve endangered migratory species (such as marine turtles, whales, and sharks), and encouraging responsible business practices. Mona has a degree in Biology with a focus on Conservation from Mid Sweden University. In the past she had a chance to work in the arid landscapes of Tunisia, the Carpathian Mountains in Slovakia, and the Baltic Sea coastline and forests of Sweden.