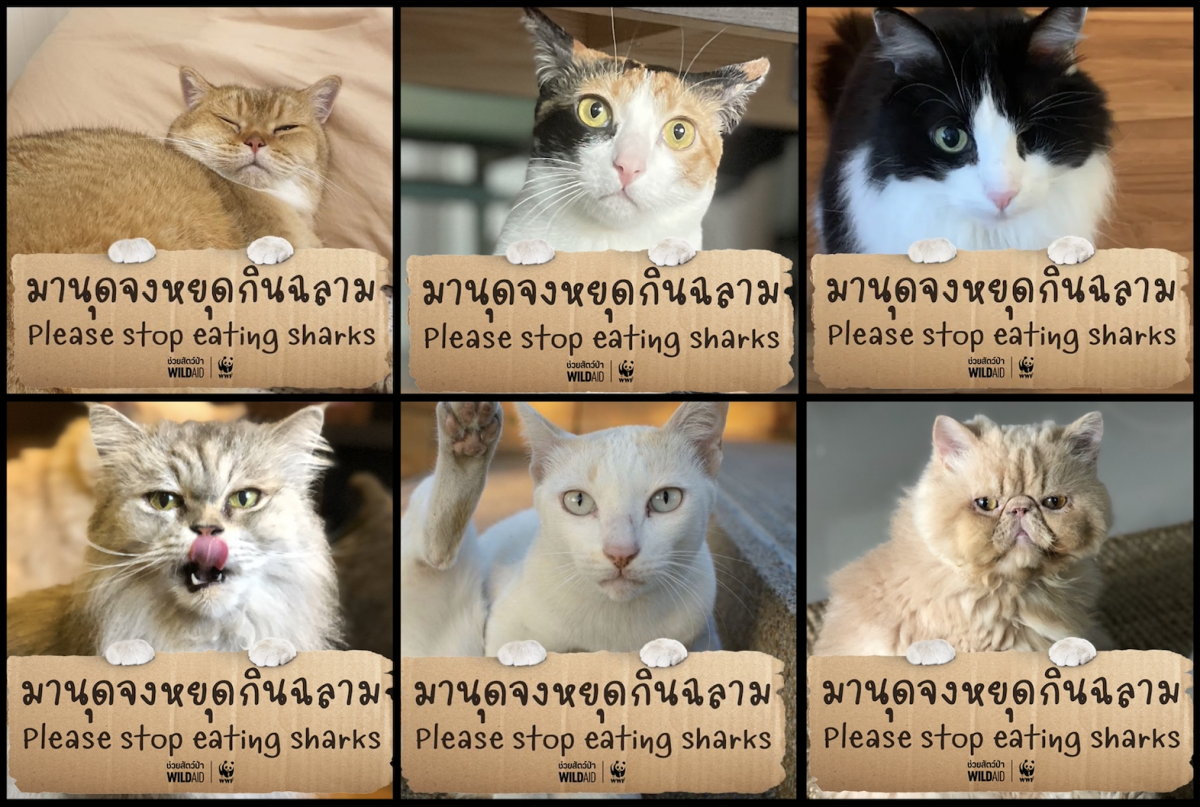 WWF-Thailand and WildAid launch ‘Cats for Sharks’, a digital campaign harnessing the power of cats and pet lovers to protect sharks

WWF-Thailand and WildAid launch ‘Cats for Sharks’, a digital campaign that enlists cats as advocates for sharks. The campaign leverages cats’ internet popularity to appeal to the public and inform viewers of how the consumption of sharks is leading to species disappearance and to harmful impacts on the oceans, which could drastically impact the seafood most cats and humans eat.

The campaign invites cat and pet lovers to create a campaign photo on www.catsforsharks.com and share it on their social media with hashtags #CatsForSharks #PleaseStopEatingSharks to help educate and discourage the consumption of sharks among friends and family. A humorous video PSA featuring a cat persuading his owner to stop eating shark fin soup will accompany the social media challenge and encourage more participation on WildAid and WWF’s social media platforms. ‘Cats For Sharks’ will also engage famous social media cat influencers to lend their voices to the campaign.

Other marketing campaigns have utilized the power of cats for a long time, but it’s the first time this ‘Catvertising’ technique is being used by NGOs to bring attention to declining shark populations and the human-based causes behind the crisis.

WildAid’s 2017 study found more than half of urban Thais have eaten shark fin and, even more alarmingly, 61% planned to consume it in the future. A 2020 assessment of Thailand’s threatened species by ONEP (Office of Natural Resources and Environmental Policy and Planning) revealed 47 of the 87 shark species found in Thai waters are at risk of extinction as a result of overfishing and bycatch. Most recently, a study published in the journal Current Biology found overfishing and the demand for shark and ray products have driven one-third of all shark and ray species toward extinction globally, according to the International Union for Conservation of Nature (IUCN) Red List. Losing these species would be disastrous as sharks are critical to maintaining the health of the ocean.

“The state of sharks is worrying, and we must find new and exciting ways to bring public attention to this matter and work towards changing consumer behavior and the societal norm of having sharks on the menu. The ‘Cats for Sharks’ campaign is aimed at turning people away from consuming sharks permanently, as most people want a healthy ocean,” said John Baker, Chief Program Officer, WildAid.

Sharks play a key role in the marine environment. They do not simply live in the ocean – they shape it and keep the ocean’s ecosystem in balance. Tiger sharks, for example, prevent the overgrazing of seagrass meadows by marine creatures like turtles and dugongs, which in turn helps the seagrass grow denser. Seagrass meadows are not only critical fish nurseries but also function as carbon sinks - capturing carbon up to 35 times faster than tropical rainforests. This way, tiger sharks are indirectly helping us buffer climate change.

Sharks are indispensable to ocean health, and the benefits they provide extend well beyond the water, ensuring the well-being of millions of people across the globe who depend on the ocean for food, tourism, and livelihoods. The unsustainable trade and consumption of shark products such as fins, meat, and oil, as well as significant by-catch from fisheries, have significantly depleted shark populations worldwide.

“We hope that ‘Cats for Sharks’ will help Thai consumers understand the close link between the unsustainable consumption of shark and ray products and alarming population declines of these animals in our oceans. In fact, we are already witnessing the first global extinctions as a result, including at least one shark species, which used to occur in Thai waters. But if we act now and curtail consumption, we can still turn things around,” said Dr. Andy Cornish, Leader of WWF’s global shark and ray conservation program.

Beyond the ‘Cats for Sharks’ campaign, WildAid and WWF will continue to deliver communication materials throughout the year and engage stakeholders from government organizations, the fisheries sector, and the tourism sector to help reduce demand for consumption of sharks and push for strengthened protection. This project is made possible by generous support from the Prince Albert II of Monaco Foundation and WildAid’s donors.

About WWF
The World Wide Fund for Nature (WWF) is an international non-governmental organization founded in 1961, working in the field of wilderness preservation, and the reduction of human impact on the environment. For WWF-Thailand, a strategy that harnesses the strengths of the WWF network focuses on six major goals – freshwater, wildlife, oceans, climate & energy, forests, and food with three key drivers to solve environmental problems, including markets, finance, and governance. For more information, please visit www.wwf.or.th or www.facebook.com/wwfthailand

About WildAid
WildAid is a non-profit organization with a mission to end the illegal wildlife trade in our lifetimes. While most wildlife conservation groups focus on protecting animals from poaching, WildAid primarily works to reduce global consumption of wildlife products such as elephant ivory, rhino horn and shark fin. With an unrivaled portfolio of celebrity ambassadors and a global network of media partners, WildAid leverages more than $218 million in annual pro bono media support with a simple message: When the Buying Stops, the Killing Can Too. More information on WildAid can be found at www.wildaid.org or follow us on Twitter @wildaid