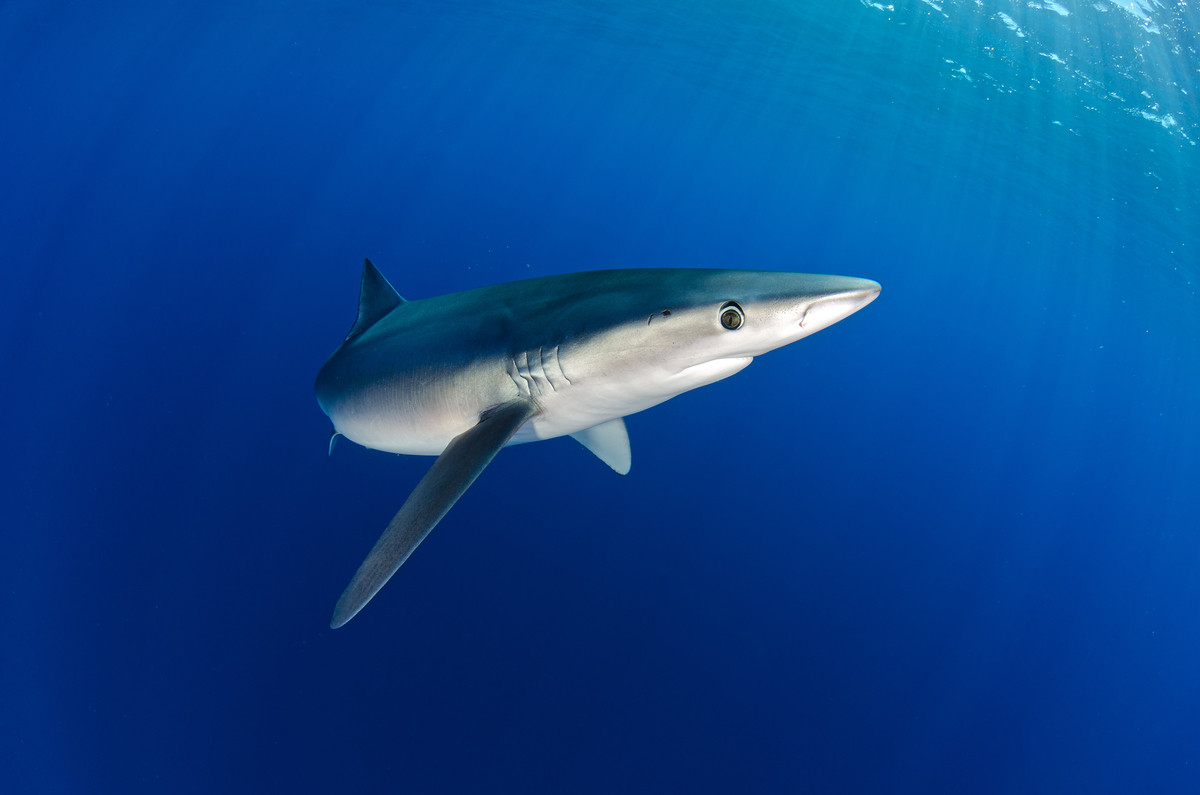 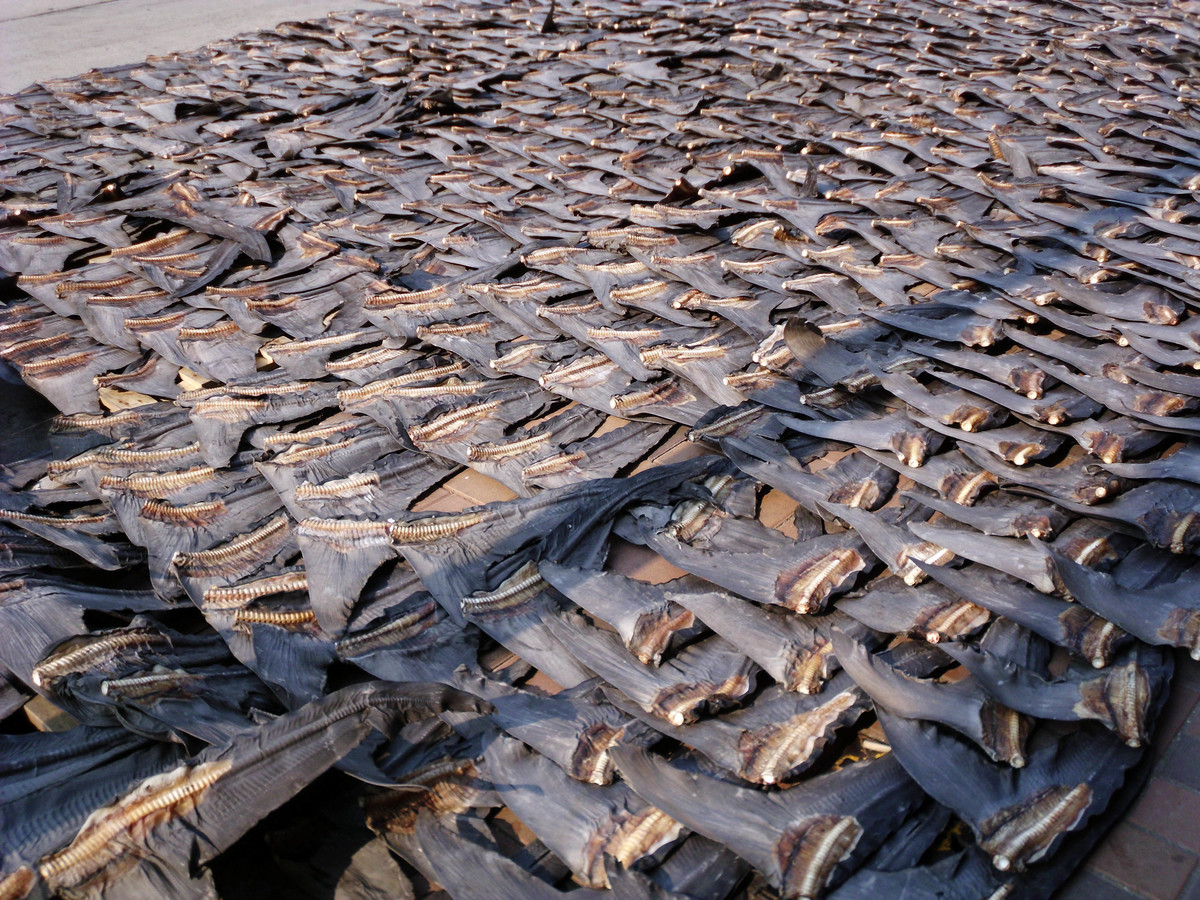 This Shark Awareness Day sharks and rays are in deep trouble. According to the IUCN’s Red List, 30% of all species are threatened with extinction. The number of endangered or critically endangered species – only one or two steps away from extinction in the wild – has gone up to 99 species from 68 in 2014. While there are a few factors threatening the survival of these fascinating creatures, the biggest single culprit is their overfishing. Each year, up to 100 million sharks and rays (that is over 10,000 per hour) are harvested all around the world. They are being fished out faster than they can reproduce.

One of the biggest factors driving their overexploitation is an almost unwavering demand for shark fin in East and Southeast Asia. Right now, 100% of all shark fin sold in Asia comes from unsustainable, untraceable sources. Fins of many different species end up in shark fin soup – a luxury dish served at wedding banquets, major family occasions, annual corporate dinners, or for Chinese New Year. Serving this dish to your guests is meant to be a sign of host’s high social status as well as respect paid to the guests. The dish is also seen as auspicious and bringing good fortune to the host and the guests. While the consumption is in decline, the demand is still way too high. As we learnt from a 2018 survey conducted with other partners, most of shark fin soup is consumed passively by people who did not order it for themselves. The majority of banquet guests end up eating shark fin soup to avoid socially awkward situations and the embarrassment of saying ‘no’, even if they aware of the environmental consequences.

How it all started 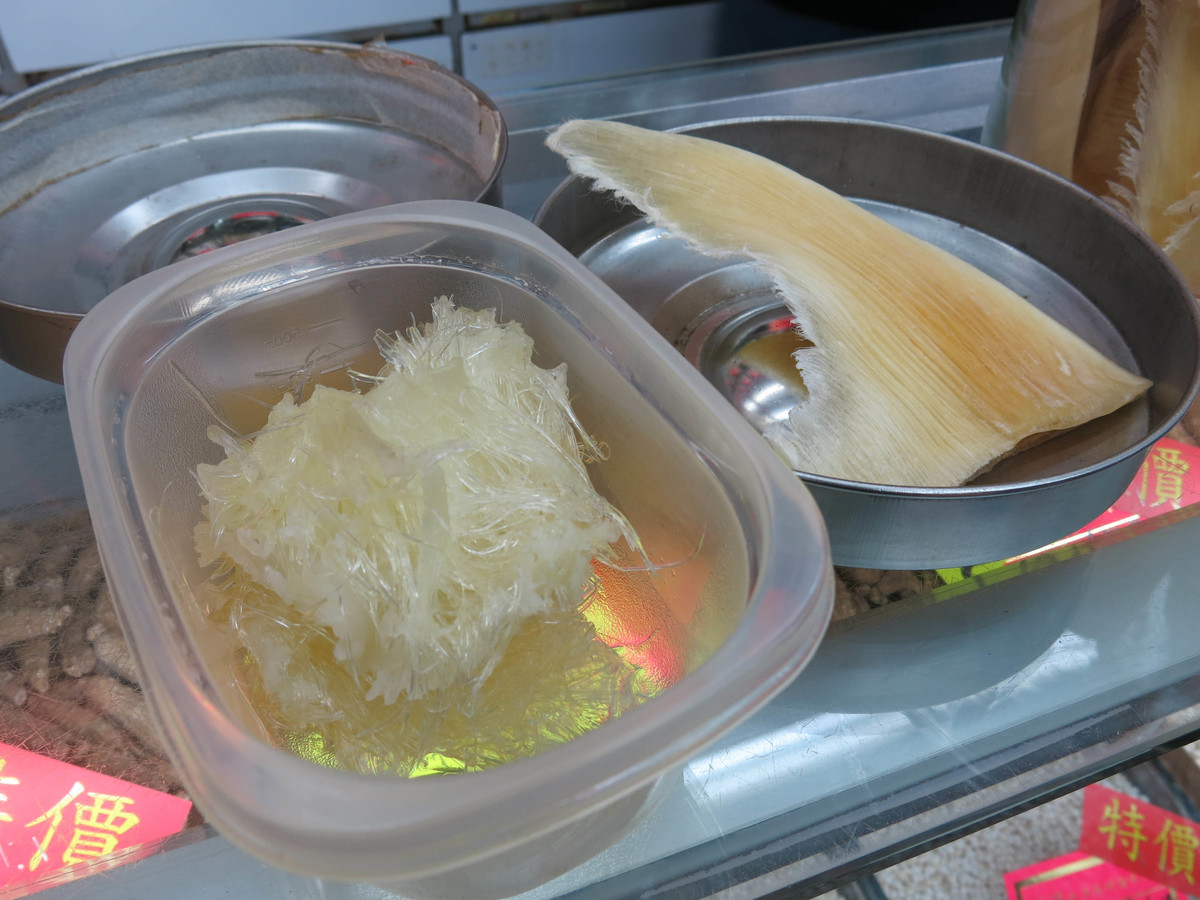 Hong Kong – where I am based – remains the world’s biggest hub for the global shark fin trade as well as probably being the biggest consumer of shark fin per capita. The 2018 survey revealed that 7 out of 10 people consumed the dish in the past 12 months! WWF-Hong Kong, where I worked as the Conservation Director in 2005 – 2012, started working on campaigns to reduce the unsustainable demand for shark fin soup in 2007. By 2009, we were engaging with restaurants and hotels, convincing them to remove shark fin soup from their menus.

One question that kept coming up during our campaigns was - how many sharks would be saved if people stop serving or eating shark fin soup? Unfortunately, we were unable to answer that – nobody was –  as we didn’t know how many bowls of soup were produced from a single “average” shark. That question kept nagging us and in 2011 we started looking into devising a way to calculate this. Our method was based on using a series of conversion factors that represented all the major stages from a dead shark being processed to produce shark fin soup. Unable to find reliable data on how much shark fin is in a bowl of soup, our team conducted local market research to find out, scrounging shark fin secretly from weddings attended by family or friends, and then extracting the shark fin by hand to weigh it.

Unfortunately, we got really stuck at one point, unable to find data that would allow us to convert the dried unprocessed weight of a shark fin into the dried processed weight. In the meantime, I moved on to lead WWF’s global shark conservation programme in 2014. It wasn’t until 2019 when one of our talented interns found the missing data in an obscure publication which allowed us to “unlock” our formula.

Our Sharkulator formula and blue shark 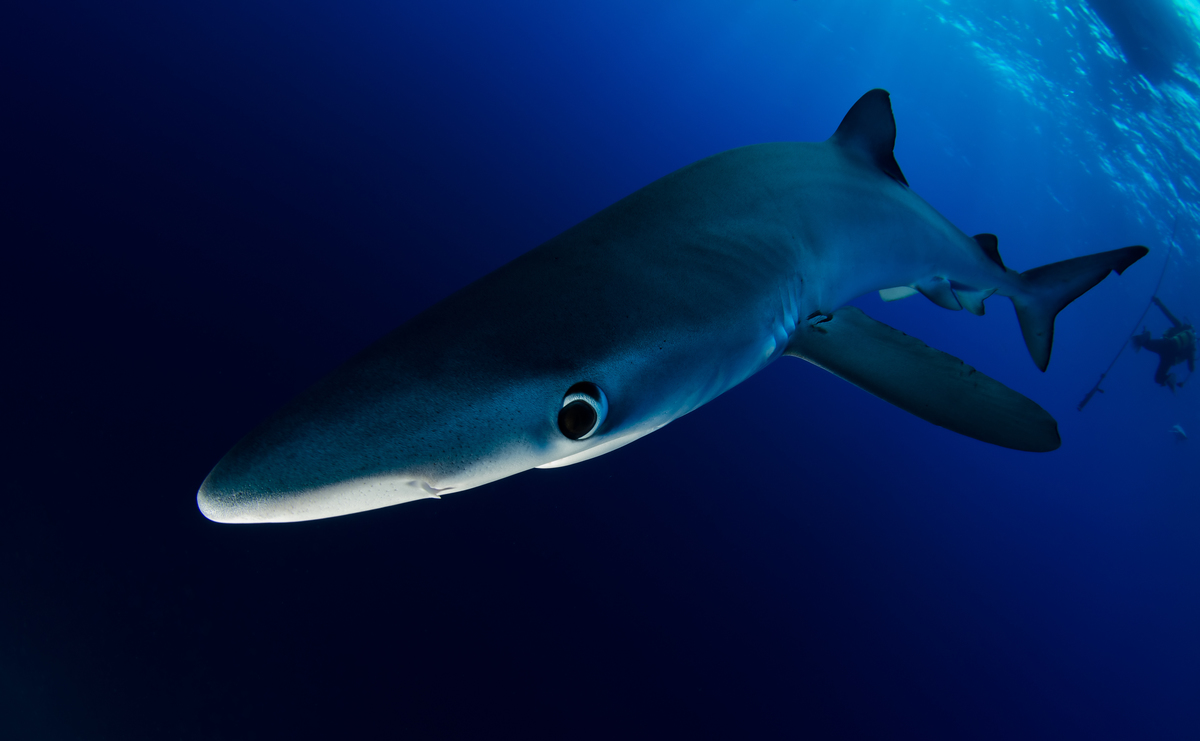 One other conundrum we faced during our research was deciding how to account for the fact that so many species can be found in the shark fin trade, in different proportions, and from animals of a wide range of sizes. To complicate things further, the species composition changes over time as populations decline and traders source products from different countries. We decided to focus on the blue shark (Prionace glauca) which is the only species accounting for over 10% of the global shark fin trade,[1] with traders suggesting it is actually closer to 30-40%. It is not only the most abundant species in the global and Hong Kong trade,[2] but also the most fished shark globally.[3] Fortunately, it has been well studied too. To ensure that our “shark fin soup calculator” – or WWF Sharkulator, as we proudly call it – best reflects what most people actually find in their shark fin soups, three out of six calculation steps are based on the scientific data for the blue shark.

An app to help save sharks 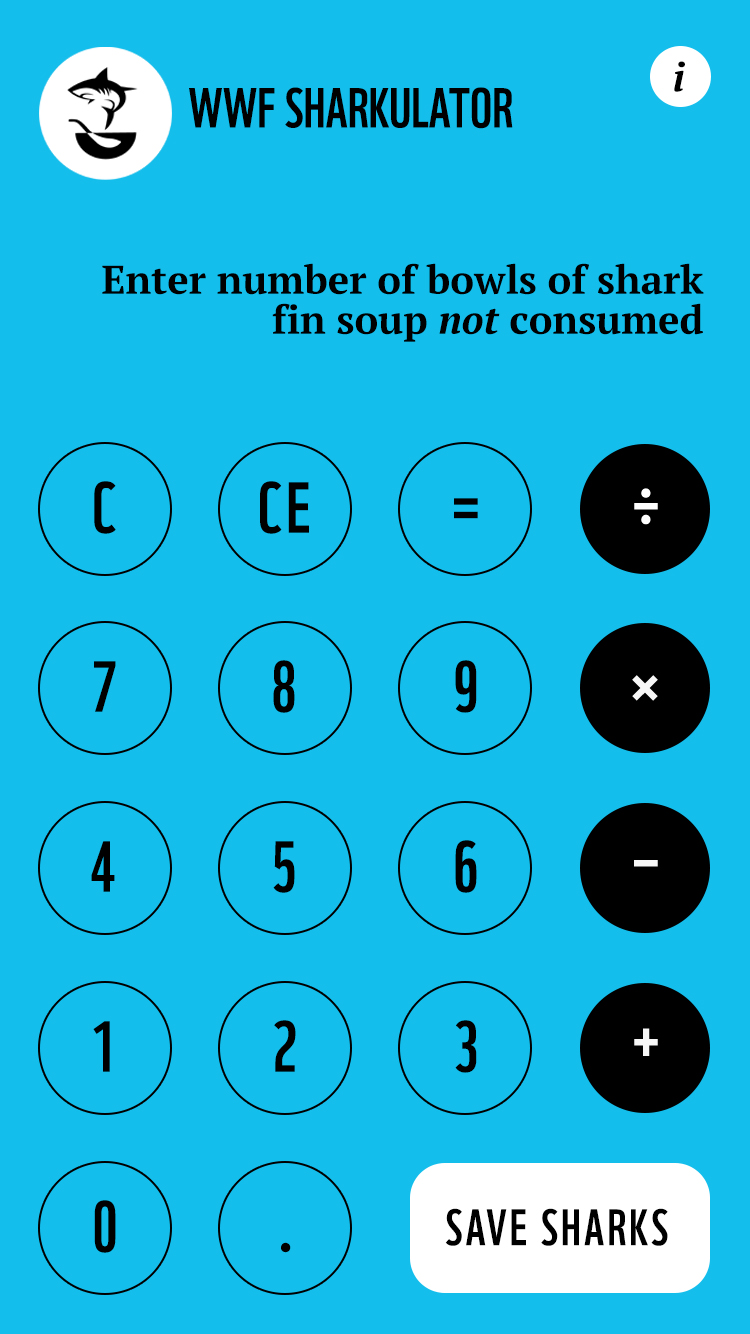 Our science-based Sharkulator methodology was peer-reviewed and improved by Dr. Shelley Clarke and Stan Shea – two experts who have worked on the shark fin trade. Finally able to answer that “big question”, we decided to turn the methodology into a calculator web app to show shark fin soup consumers the positive impact of their decisions to go fin-free and hopefully convince more people to do so.

On this Shark Awareness Day, we are launching WWF Sharkulator in China, Hong Kong, Indonesia, and Malaysia where WWF and TRAFFIC work to reduce shark fin soup consumption – and this is just the beginning.  The full WWF Sharkulator methodology, which we are releasing together with the app, is now publicly available and can be improved over time – whether by us at WWF or others. While our teams are already busy planning how to use the app in many creative ways, we would like to challenge you – our followers and friends – to think of how you would use the WWF Sharkulator to convince even more people to say no to shark fin soup. We would love to hear from you!