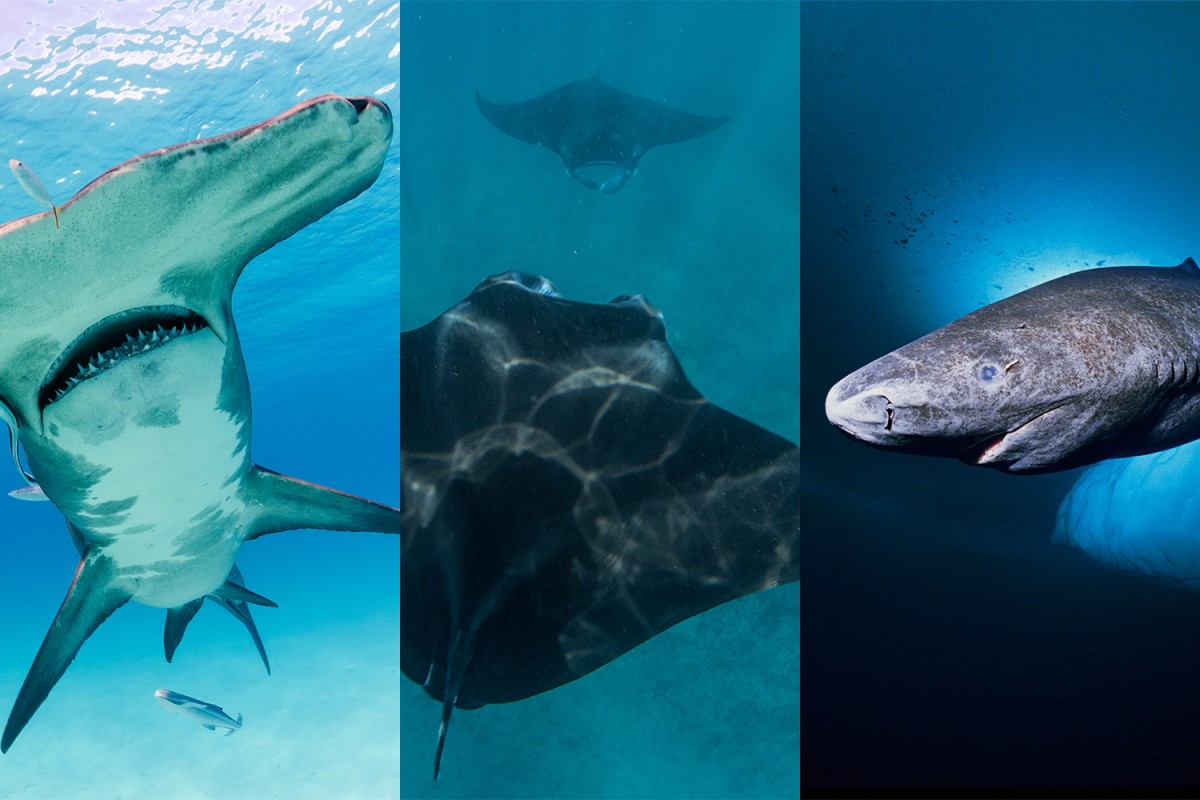 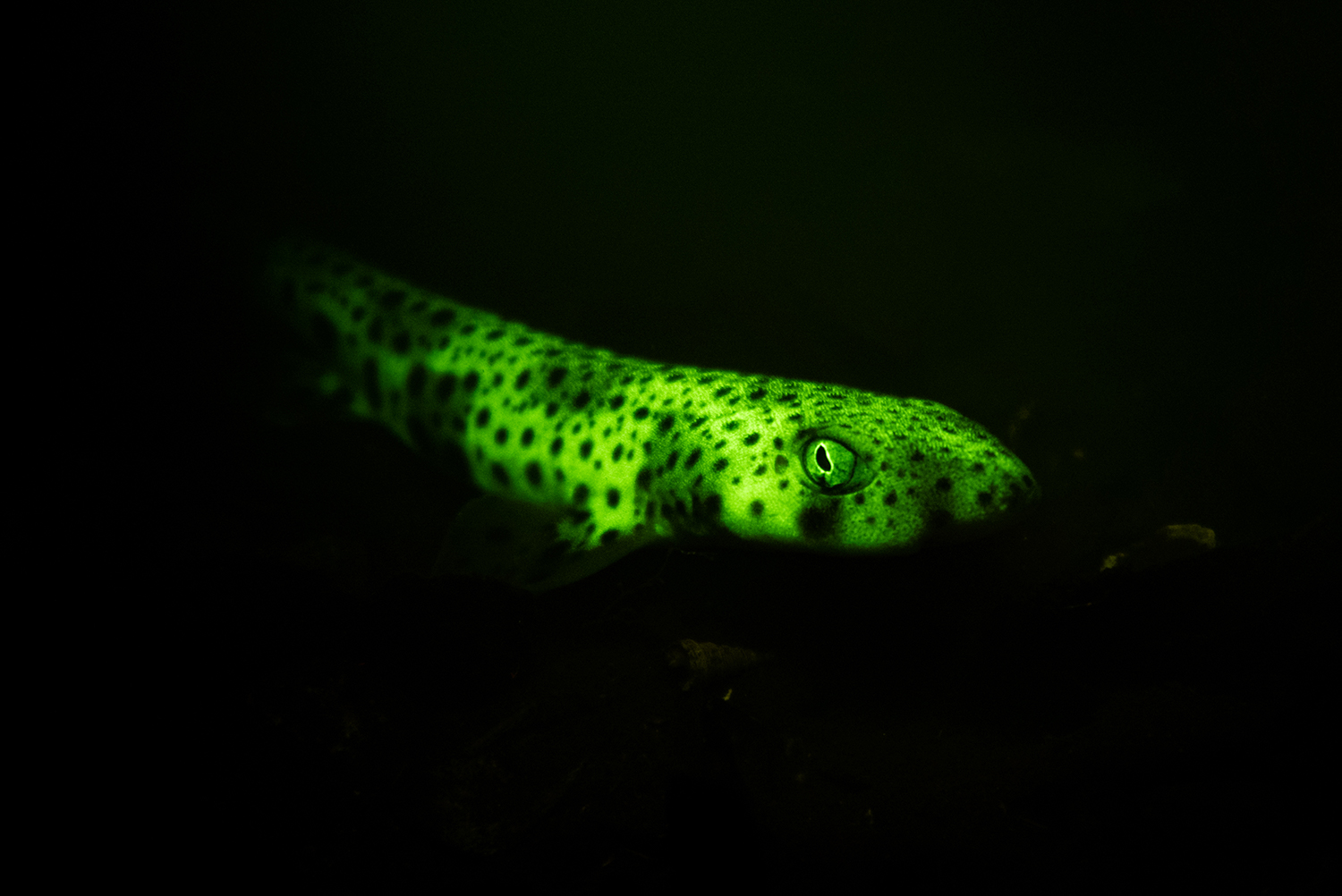 Did you know that some species of sharks can generate light thanks to  bioluminescence? Lantern sharks, which inhabit the mesopelagic (deep-sea) zones below 200 metres filled with darkness, can generate light thanks to photopores – tiny pores in their skin. Researchers believe they may be using this superpower for recognition by other catsharks and for schooling; it may also improve their vision. There is another way in which sharks can manipulate light – biofluorescence. Some species of swell shark and catshark – just like the one in the photograph – have the ability to absorb blue ocean light and then re-emit it as green fluorescence!  The secret once again lies in their skin, which is filled with small fluorophores that absorb and then re-emit light. Scientists studying this incredible superpower believe sharks use biofluorescence for intra-species camouflage and communication. 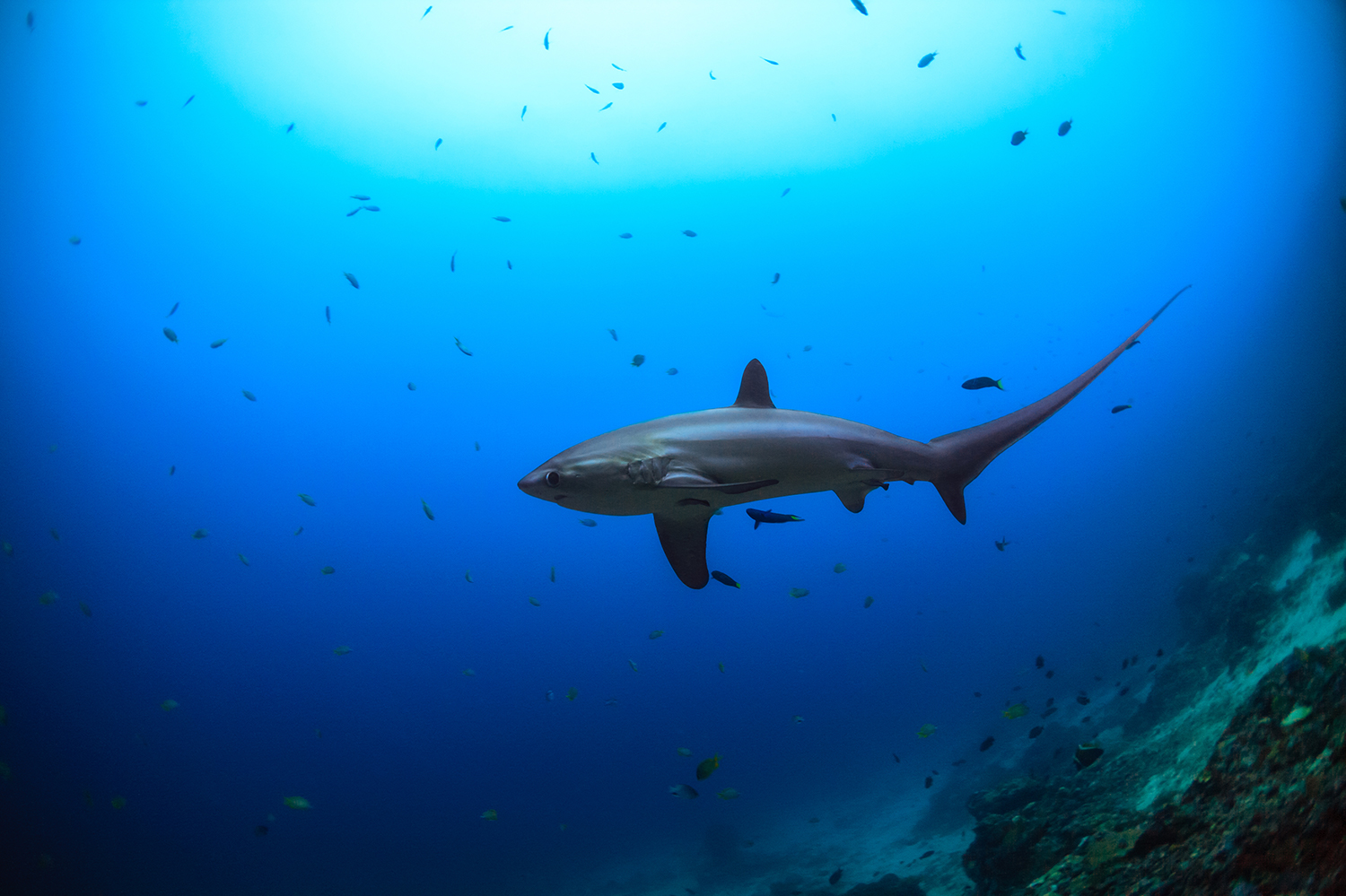 A 3-species-strong family of thresher sharks cruises around open oceans, (mostly) far away from lands. Their stunning, very long, whip-like tail is their secret superpower! With these sharks reaching nearly 6 metres in length, their tails are often the length of the entire body – or even longer. For a long time people suspected that there must be more to the thresher tail than just its beauty. Thanks to the underwater footage captured in 2010 in the Philippines, it was confirmed that threshers use their powerful tails for hunting. Swimming at great speed towards shoals of sardines or other small fishes and then slapping the tail like a whip in their direction while coming to an abrupt halt, these sharks stun their prey in numbers. You can watch one in action here – isn’t this a real superpower?

Sadly, all three thresher shark species are threatened with extinction due to overfishing, with pelagic thresher (Alopias pelagicus) in particular danger, having declined by up to 79% in the Indo-Pacific. 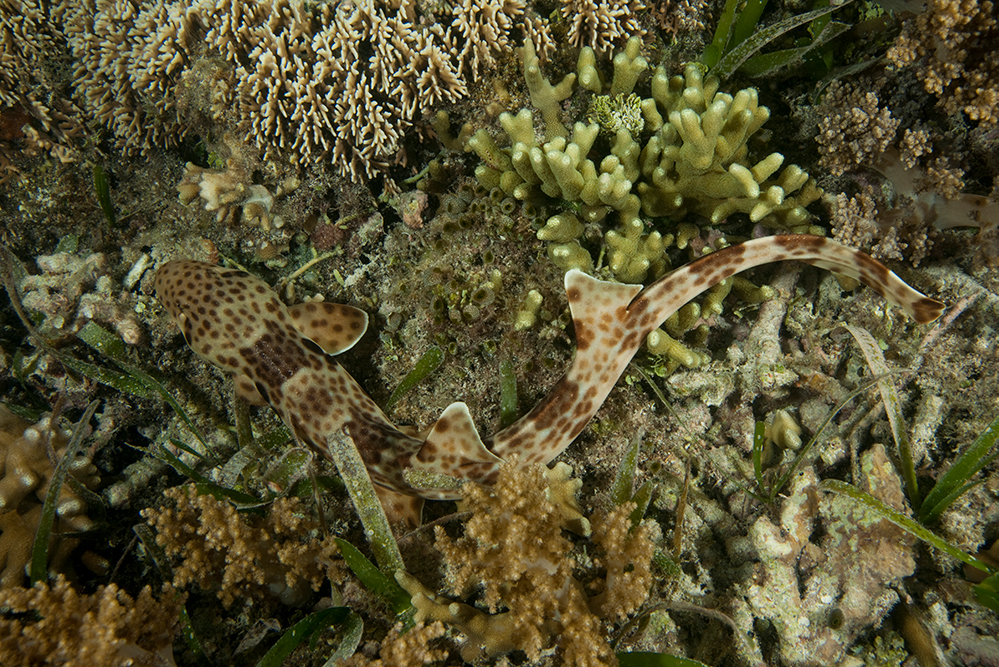 Walking, you may say, even I can do that. But for a fish to walk – that is quite something! A small species of an in-shore shark inhabiting coral reefs – the Epaulette shark (Hemiscyllium ocellatum) – has quite an unusual superpower for a fish. Yes, it can walk! Inhabiting shallow coral reefs, this species uses its paired fins to crawl over the coral when hunting – in fact, it prefers to do that instead of swimming. And if walking wasn’t cool enough for a shark, the Epaulette shark can also hold its breath for 60 times longer than a human while searching for food in rocky pools! You can see one using this superpower here. 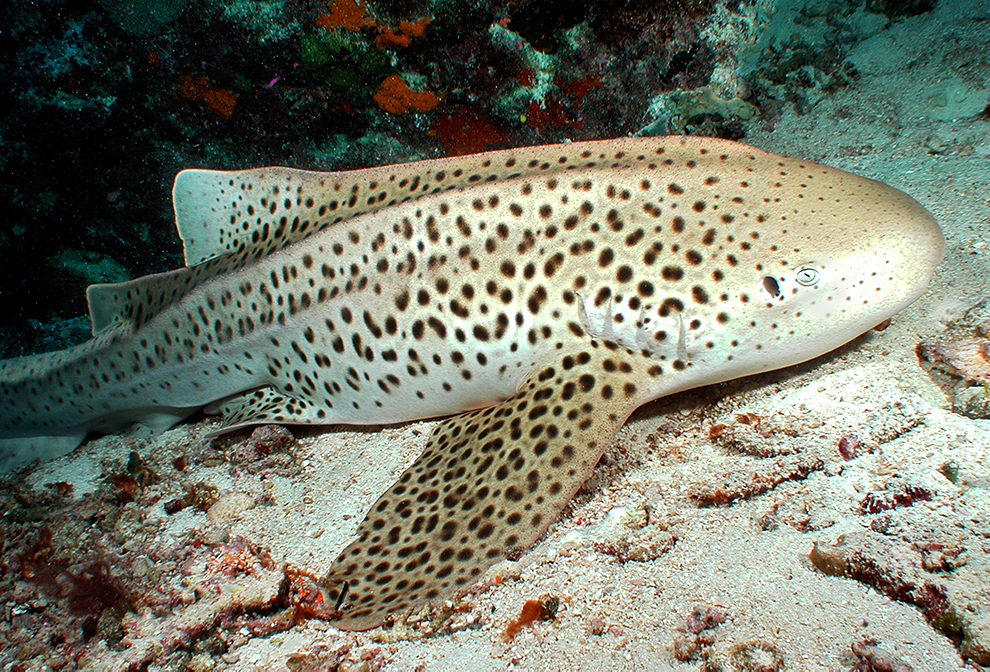 Zebra shark (Stegostoma tigrinum) is a small species inhabiting shallow coral reefs, which – believe it or not – can clone itself! It has been observed that Zebra sharks can reproduce through the process of parthenogenesis where the female produces offspring without fertilization by a male. Through this form of asexual reproduction, female Zebra sharks produce genetically identical offspring, which are clones of each other and the parent. If this isn’t a real superpower, then what is?

Sadly, Zebra sharks are classified as Endangered on the IUCN Red List, facing a very high risk of extinction in the wild because of overfishing. 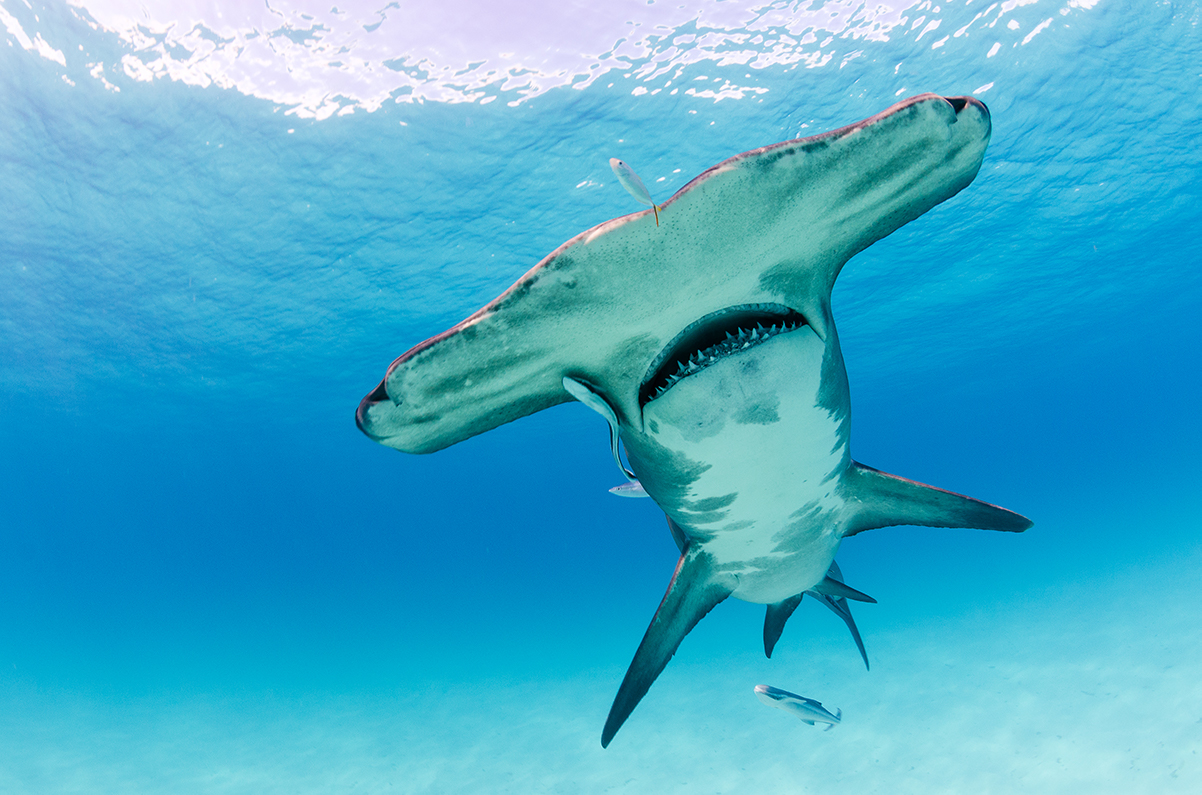 Hammerhead sharks, some of the most iconic marine predators on our blue planet, getting their name and fame from their unusual hammer-like head. But there is one more crucial benefit their special cephalofoil (this special head shape) brings them – their super-sight! Thanks to this unique anatomical trait, hammerheads show enhanced binocular vision when compared to most shark species. Their horizontal range of view is much larger; they also have a full 360 ̊ vertical vision. For comparison, our human vision is only 120o – that’s three times less than a hammerhead shark!

Unfortunately, five out of eight hammerhead species are threatened with extinction due to rampant overfishing. Scalloped and Great hammerhead sharks are classified as Critically Endangered, only one step away from extinction, and the extremally rare Winghead shark is Endangered. 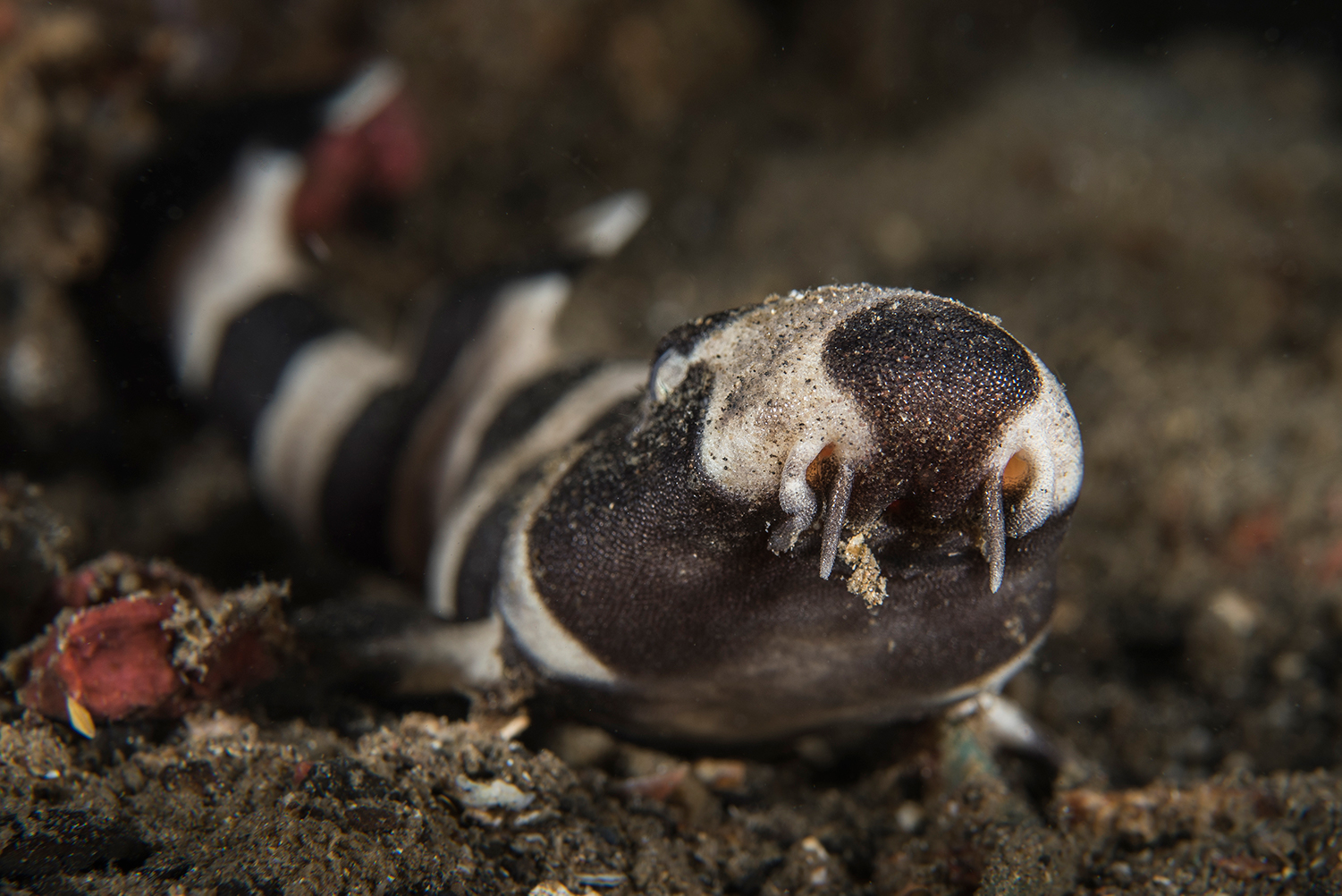 A small and beautifully patterned species of a carpet shark – brownbanded bamboo shark (Chiloscyllium punctatum) – barely reaches 1 metre in length. Inhabiting inshore coral reefs and sandy bottoms, this species is oviparous, with mature females laying eggs. While sharks in general have electroreceptors called ampullae of Lorenzini, which help adults sense minute changes in electric fields and are often used for hunting, shark embryos use it as a defence mechanism. Embryos of these bamboo sharks have been observed to “freeze” when exposed to predator-like electric fields – a real sixth sense! They stopped breathing and coiled around themselves to reduce disturbance to water and change electric fields. When a predator moves away, their living functions return to normal. 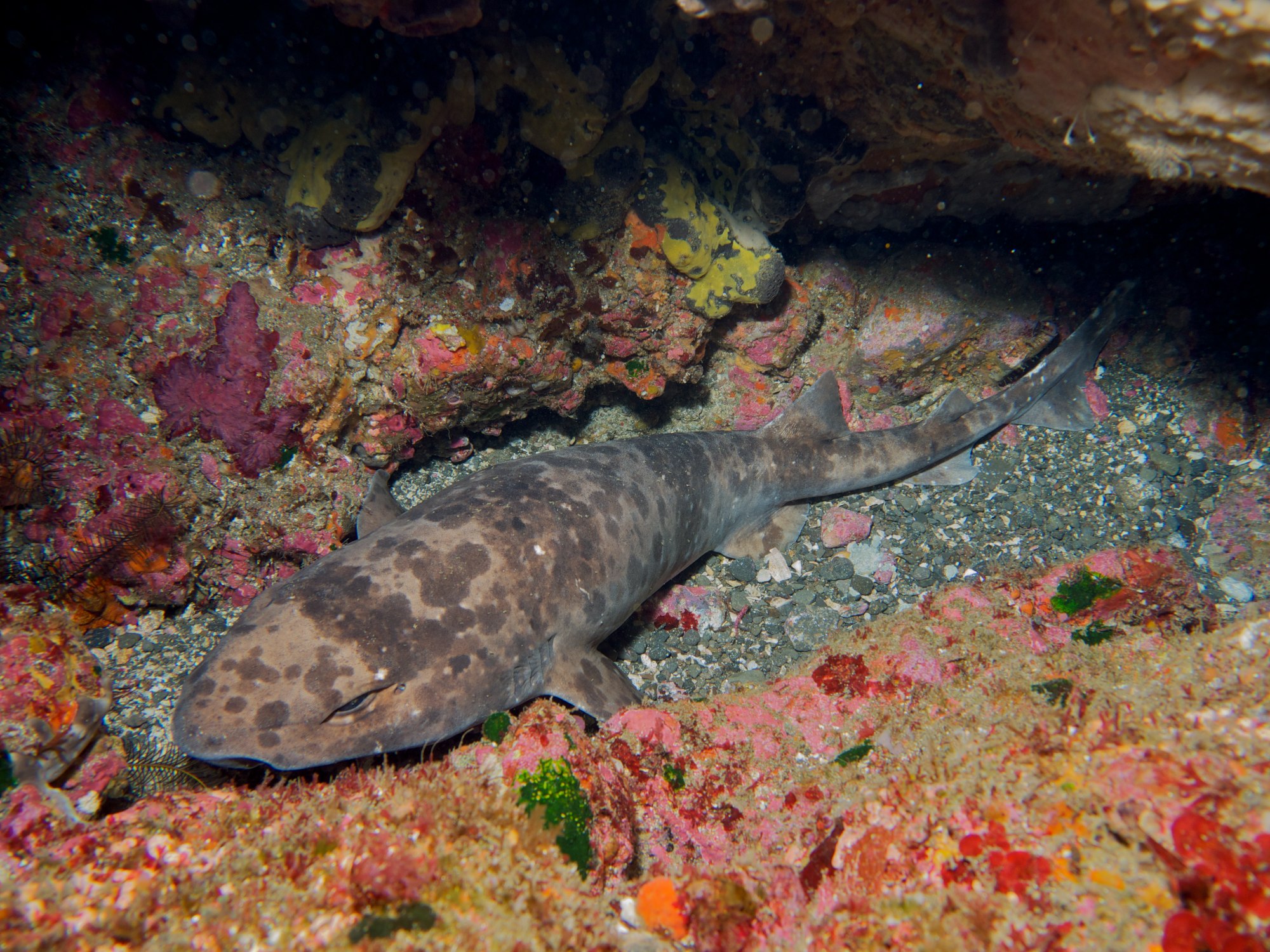 In spite of their rather inconspicuous looks, swellsharks (Cephaloscyllium uter) can proudly boast a cool super-power that no other elasmobranch species has been observed to display. When in danger, swell sharks turn into real shapeshifters, puffing themselves up to double in size and appear much larger than they really are. At around 90cm in length, these rather small sharks have two different stomachs – to use their super-power, they inhale seawater and inflate one of these stomachs. With danger no longer in sight, they deflate and return to their normal size. 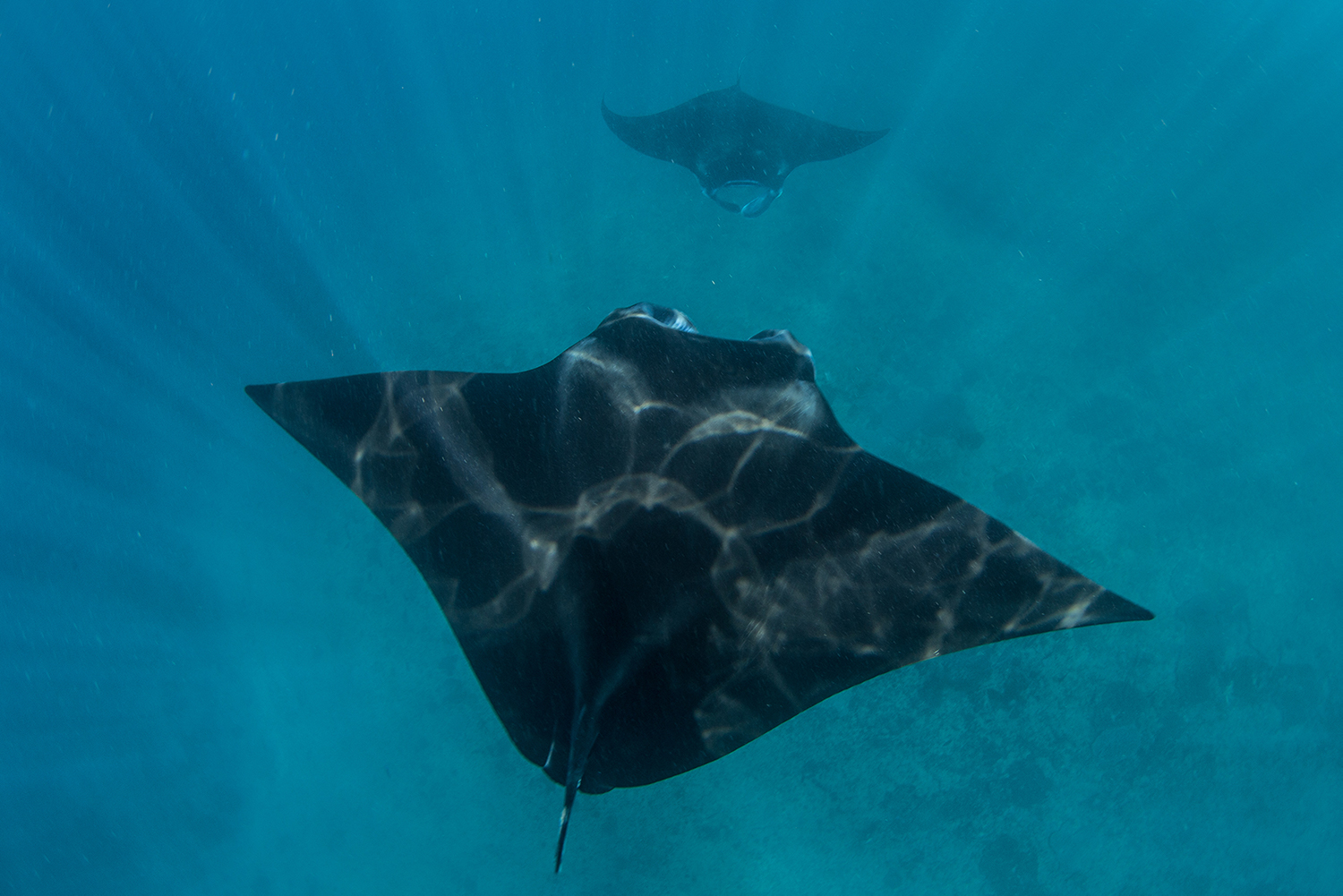 While the general misconception might be that fishes – therefore, also sharks and rays – don’t feel or think, this is far from the truth. With the largest brain-to-size ratio of any cold-blooded fish, manta rays are the true super-brains of the big blue! For example, studies have shown that mantas might be capable of recognizing themselves in the mirror – an ability they share with dolphins, primates, and elephants, which indicates high cognitive function. It has also been shown that these incredibly intelligent animals can create mental maps of their underwater environment – a sign of their highly developed long-term memory. 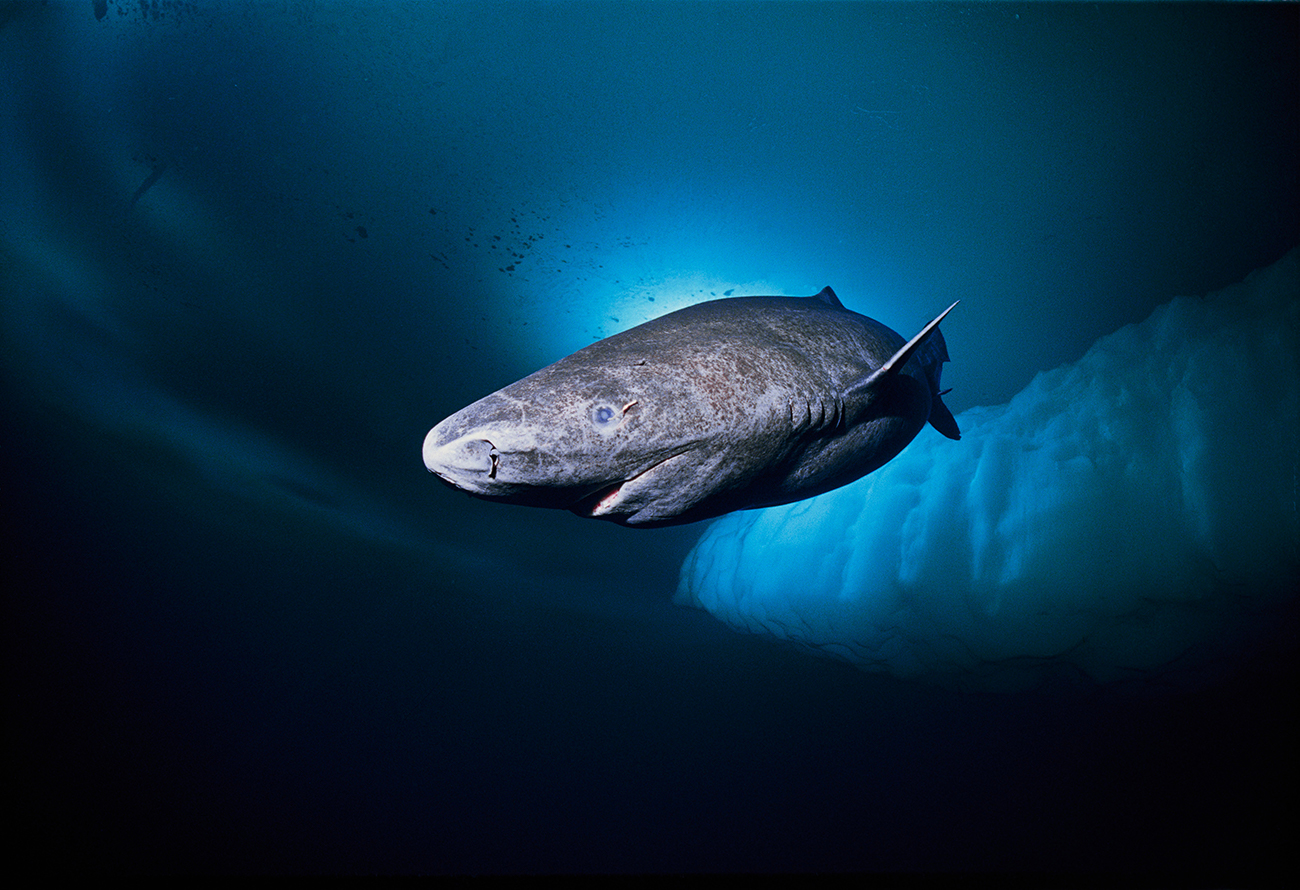 Although most people associate sharks with tropical waters, there exist species which inhabit extremely cold environments too, including the Greenland shark (Somniosus microcephalus) – a particularly slow-growing species of the Arctic Seas. Growing up to 5 meters in length, these sharks hold a very special superpower – they can reach a very, very old age! Researchers using radiocarbon dating technique have managed to determine that these special sharks could live up to 500 years old, with the oldest studied female counting around 400 years! They have also discovered that Greenland sharks don’t reach sexual maturity until they reach 150 years.

Superpowers losing with a super-threat 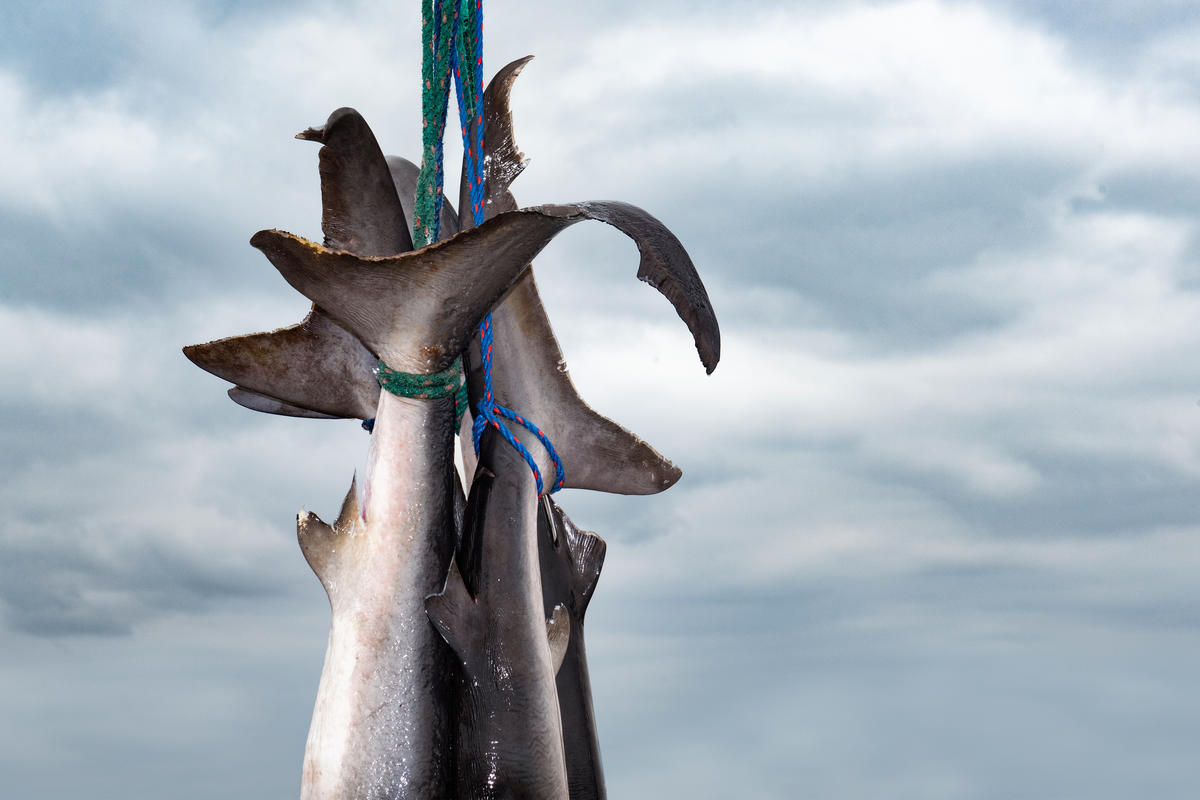 Even though sharks and rays have developed all these fascinating super-powers during hundreds of millions of years of evolution, Mother Nature could not have prepared them for their number #1 super-threat – overfishing. Up to 100 million sharks and rays are caught each year all around the world. Growing slowly and maturing relatively late, these iconic marine creatures are killed faster than they can reproduce. According to the IUCN Red List, 30% of all shark and ray species are threatened with extinction – a shocking statistic! But not all is lost – if we work together and implement science-based solutions to this global shark crisis, we can still save these animals. Want to get involved? Find out how you can help here!