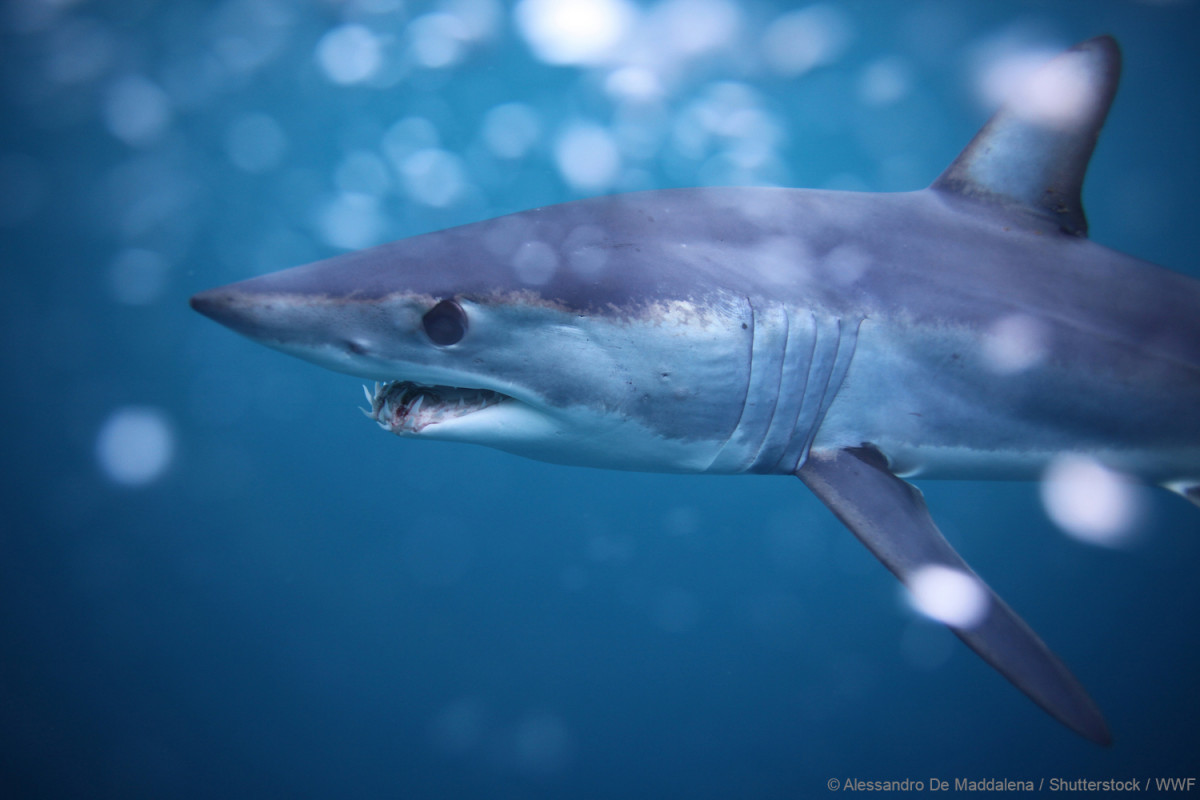 (23 November 2021) After years of negotiations, today 52 tuna fishing nations and the EU adopted a comprehensive rebuilding programme to allow the recovery of the endangered mako shark in the North Atlantic. WWF welcomes the plan as the most efficient way to immediately stop the overfishing and dramatic decline of shortfin mako sharks and set the species on a path towards recovery. The decision came at the end of the annual meeting of the International Commission for the Conservation of Atlantic Tunas (ICCAT) held virtually from 15 to 23 November.

Alessandro Buzzi, Fisheries Project Manager at WWF commented: “Today’s decision by ICCAT to adopt a rebuilding programme for the endangered shortfin mako sharks in the North Atlantic is a great achievement. Now it's all hands on deck. With as little as 20% of the mako shark population left in the North Atlantic [3], the measures adopted must be immediately implemented and fully enforced. It’s also crucial that similar recovery plans are adopted in other oceans with increased data collection, effective bycatch mitigation and a regular review of the efficiency of the measures. Fisheries must and can urgently reduce their impact on threatened oceanic sharks and rays.”

This is the first rebuilding programme for a shark or ray species ever adopted by a regional fisheries management organization for tuna (tuna RFMO) [1]. The rebuilding plan will mean that for the next two years fisheries will not be allowed to retain on board, tranship or trade any dead or live shortfin mako sharks caught in the North Atlantic. In case live sharks are caught, fishers will have to apply best-practice handling techniques to release the animals safely back into the water. An increase in the number of observers (up to 10% of those on board relevant ICCAT vessels) has also been introduced [2].

Starting from 2023, ICCAT scientists will define the possible retention of a limited amount of dead shortfin mako sharks and identify options for closing fisheries in certain areas or periods and other bycatch mitigation measures, provided this does not impair the recovery of the species.

WWF believes that, when fully implemented and enforced, this comprehensive set of measures will significantly limit the catches of mako and other shark species while it provides incentives for the fishing sector to increase transparency and engage in data collection and protection measures.

WWF recently called on all tuna regional fisheries management organisations (RFMOs) to implement a similar set of science-based measures to address the catastrophic declines of oceanic sharks and rays. Populations of these species have plummeted globally by 71% since 1970 due to overfishing.

Shortfin mako sharks have long been highlighted as a species in urgent need of better management. They are particularly vulnerable to overfishing and have a very low reproductive rate [4]. Since the mid-1990s, their global catch rate has increased dramatically, and regional tuna fisheries management organizations have so far repeatedly failed to adopt the measures necessary to ensure science-based management and long-term survival of the species. Acknowledging the detrimental impact of fishing on the species, this year the EU has also banned any international trade of shortfin mako sharks fished in the North Atlantic in application of CITES.

WWF also welcomes the adoption of a rebuilding plan for the overfished Mediterranean albacore and the decision to address some of the existing weaknesses in the control system for bluefin tuna, especially regarding farming activities. In addition, the adoption of new measures to strengthen the monitoring of transhipment activities is a positive move towards tackling IIlegal Unregulated and Unreported (IUU) fishing and illegal trade of tuna, sharks and other pelagic species. WWF regrets that ICCAT parties decided to increase fishing quotas for bigeye tuna while the stock has just started recovering. They also decided to reduce the closure of Fishing Aggregating Devices (FADs) [5] from 3 months to 72 days, increasing the risk of juvenile catches for  bigeye and yellowfin tuna.

[1] As shortfin mako sharks share the open ocean with tuna and swordfish, they are frequently caught by pelagic longlining fisheries accidentally (bycatch) or as a target species. Categorizing catches of oceanic sharks and rays, including the shortfin mako shark, as “bycatch” by the tuna RFMOs masks the fact that these include targeted fisheries for sharks and rays, and that these animals are often valuable secondary catch in longline and gill net fisheries.

[2] This applies only to vessels, like longliners that may have interaction with North Atlantic shortfin mako.

[3] According to the IUCN’s Red List of Threatened Species, the shortfin mako has declined by up to 79% in the North Atlantic over the past 70 years and is now listed as globally endangered (only two steps away from extinction in the wild).

[4] Female shortfin mako sharks start breeding at around 20 years of age. They have a 3 year reproductive cycle giving birth to about 4 to 25 pups.

[5] FADs (fish aggregating devices) are floating objects deployed at sea with the aim to aggregate fish to increase catches.