After seven years of living the life aquatic, I removed my dive kit for what I hoped was the final time, returned to university to further my studies in commercial fisheries, and vowed to never don such gear again. Yet, within minutes (maybe even seconds) of landing on the tropical island in the heart of the South Pacific, I went back on this vow quicker than a mako shark chasing a speedboat.

One of the first things that anyone with even a passing interest in sharks does when in Fiji is look to go on the world famous shark dive, where you can get up close and personal with large bull sharks. Shark (and ray, everyone always overlooks these charismatic “pancake sharks”) tourism plays a huge part in Fiji’s economy, contributing an estimated US$42.2 million, and is also one of the biggest growth areas of marine ecotourism, yet many species of sharks and rays face an increased threat of extinction from overfishing and habitat loss. The shark dive experience in Fiji was founded on conservation principles that aim to minimise adverse impacts on sharks, while working closely with local communities (click here for detailed information on Shark Reef Marine Reserve) and WWF in collaboration with our partners at Project AWARE and The Manta Trust. Together, we brainstormed ways to develop a set of guidelines aimed at providing some practical advice to tourism operators wanting to set up a responsible shark and ray experience. In March 2017, with support from our partners at Royal Caribbean Ltd., we launched Responsible Shark and Ray Tourism – A Guide to Best Practice. The Guide consists of information on some of the conservation issues facing sharks and rays, practical tools for developing best practice and examples of existing interaction guidelines. Normally, once an NGO launches a report or a product such as the Guide, effort shifts to the next piece of work. But the development of the Guide was only the start for this particular project.

Since its launch in March 2018, there has been an extremely positive response from the marine tourism industry, with multiple requests to learn more about the Guide as well as requests for advice on how to improve operations. In November 2017, Project AWARE held two training sessions at the annual DEMA diving expo in Las Vegas. Numerous DEMA delegates eagerly participated in workshops where they were able to use the Guide to rate some hypothetical tourism operators that provided some great feedback on its practicality. The gatherings also initiated some insightful discussions among operators, who were able to question whether they were doing all that they could to conduct safe and responsible shark and ray tourism. 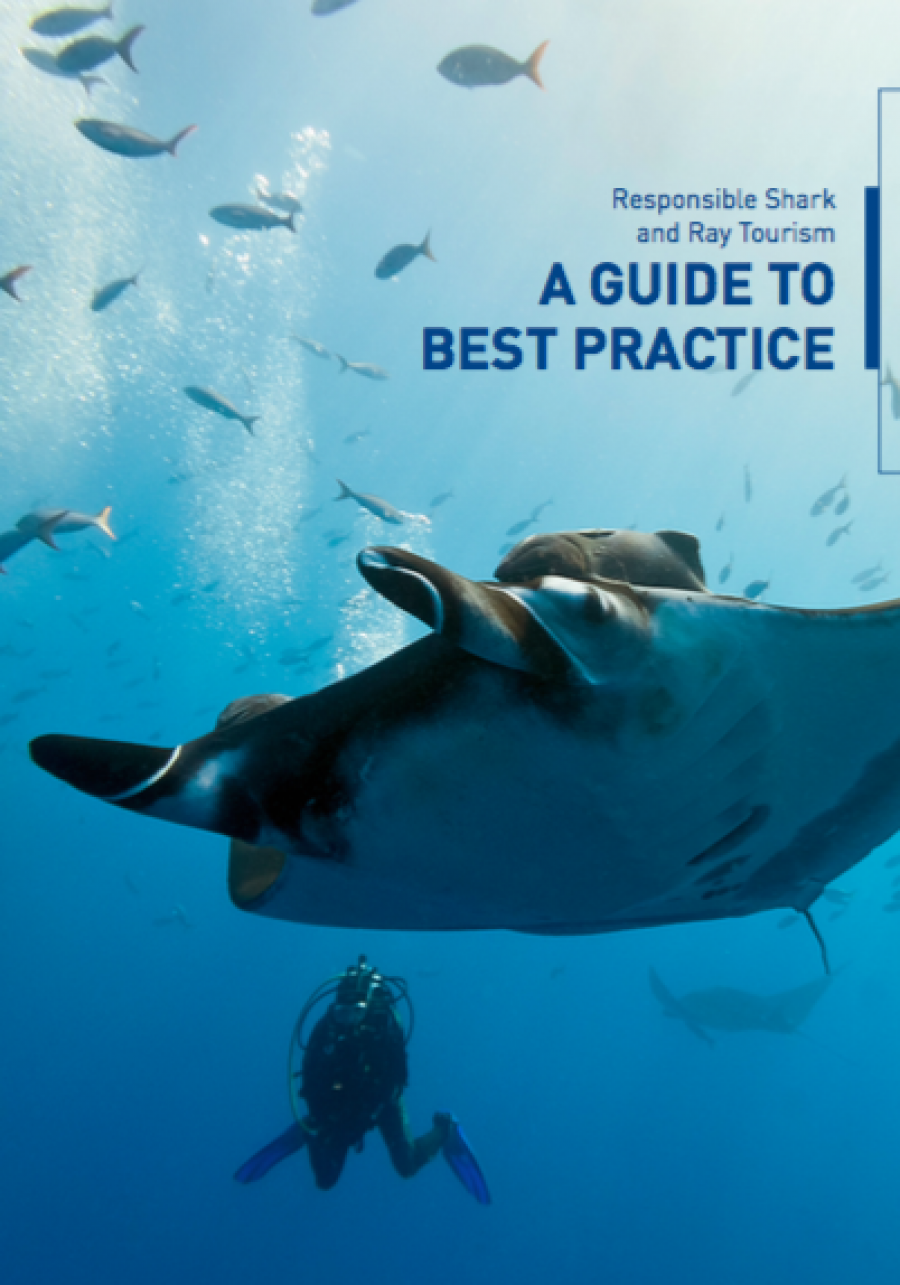 Since its launch in March 2018, there has been an extremely positive response from the marine tourism industry to the Guide.

Later that month, I was invited to present the Guide at the West New Britain regional tourism policy forum in Papua New Guinea. As part of the Coral Triangle Initiative, PNG is seeking to ensure future developmental progress as sustainably as possible. West New Britain is a relatively unexplored province of PNG, where the phrase “untapped tourism potential” could be applied to a number of prospective attractions for overseas visitors. Keen “twitchers” can watch indigenous birds of paradise swoop among the trees (including the extensive palm oil plantations), historians can trek along trails scattered with reminders of World War II battles, while divers and snorkelers can enjoy the relatively unspoiled corals and large fish shoals found in Kimbe Bay. To ensure any future tourism development in West New Britain is undertaken as sustainably as possible, WWF was asked to present the responsible shark and tourism guide to the region’s tourism operators and officials. As a result, the main dive operator in the region, Walindi Plantation Resort and their live-aboard dive vessel MV FeBrina, will be incorporating elements of the Guide into their operations. As a result of this work with the West New Britain tourism sector, WWF has been asked to present the Guide to all dive operators in PNG to help direct the country’s up-and-coming diving sector. Could Papua New Guinea become the next shark and ray diving hotspot? Watch this space. The year 2017 ended on a real high for everyone involved in the project when the Fijian government included the development of a Code of Conduct for interactions with manta rays as part of their Voluntary Commitment as co-chair of the UN Our Oceans conference. This work was the result of close consultation with WWF, and kudos must be given to the Ministry of Fisheries and Ministry of Environment for advocating this as part of a comprehensive set of shark and ray conservation measures.

This year kicked off where 2017 ended, with a flurry of activity for WWF’s shark and ray conservation program leader, Andy Cornish, heading off to back-to-back dive shows in Hong Kong and Singapore, where he held information sessions and workshops for tourism operators from across Asia and beyond. I was lucky enough to stay close to home where I worked with resort managers and dive operators to see how the Guide could be used to improve Fiji’s already well-established shark and ray tourism industry.

While we have come a long way since the idea of some kind of shark tourism guide was bandied around the organisation way back in 2014, rest assured that WWF, Project AWARE and The Manta Trust will not be resting on our laurels. We have set ourselves some ambitious targets of getting as many ecotourism operators as possible up to speed on best practices when it comes to shark and ray interactions, and we are already planning on working with partners in the Caribbean, Malaysia and Latin America. As someone who has seen the benefits of a well-designed and effectively managed tourism venture, both for the animals they rely on for customers and for the local communities and economies, I am relishing the fact that the hard work has only just begun.

But what are the next steps, and what could the future hold? With the anticipated rapid expansion of shark and ray tourism, research highlighting the impacts of shark tourism and some speculative reports that shark and ray species could be diversifying their known habitats, WWF and our partners want to see a marked increase in the number of operators working towards improving their methods. And if you are a diver, you can also help. Did you know that there is a “Trip Advisor style” site where you can rate shark/ray operations? Also, if you find yourself looking for a vacation destination that will include going to see sharks and rays (and who would want to go on any other type of vacation anyway?), get in touch with the operator and ask them if they have heard of our Guide. If they haven’t, let them know about it, after all, the customer is always right.

Image below - Ian Campbell on the hunt for sharks