5 ways in which sharks and rays help ecosystems, other species, and people.

Let’s celebrate some of the most enigmatic and misunderstood creatures of the blue – sharks and rays, which are crucial for the health of our planet! Here are 5 incredible ways in which sharks and rays help the world, from fighting climate change, to sharing food with their neighbours, to growing phytoplankton, and more. 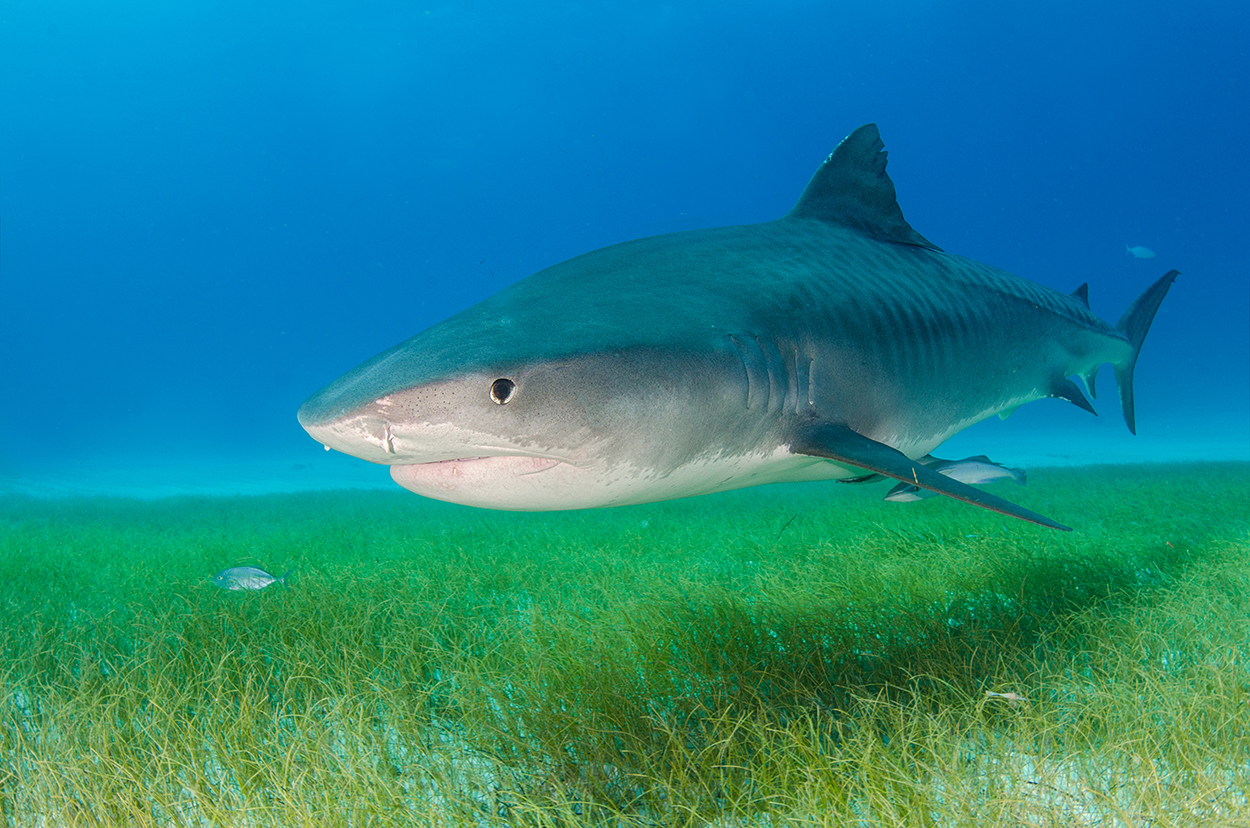 Did you know that tiger sharks in Western Australia help to make oceans more resilient to climate change? How? Swimming around the shallow seagrass meadows, these sharks serve as crowd-controllers and prevent overgrazing by marine creatures such as turtles or dugongs. Less continuous grazing in the same spot means more abundant, denser seagrass. And you know what captures carbon from the atmosphere 35 times faster than tropical rainforests? Yes, that’s right – seagrass! 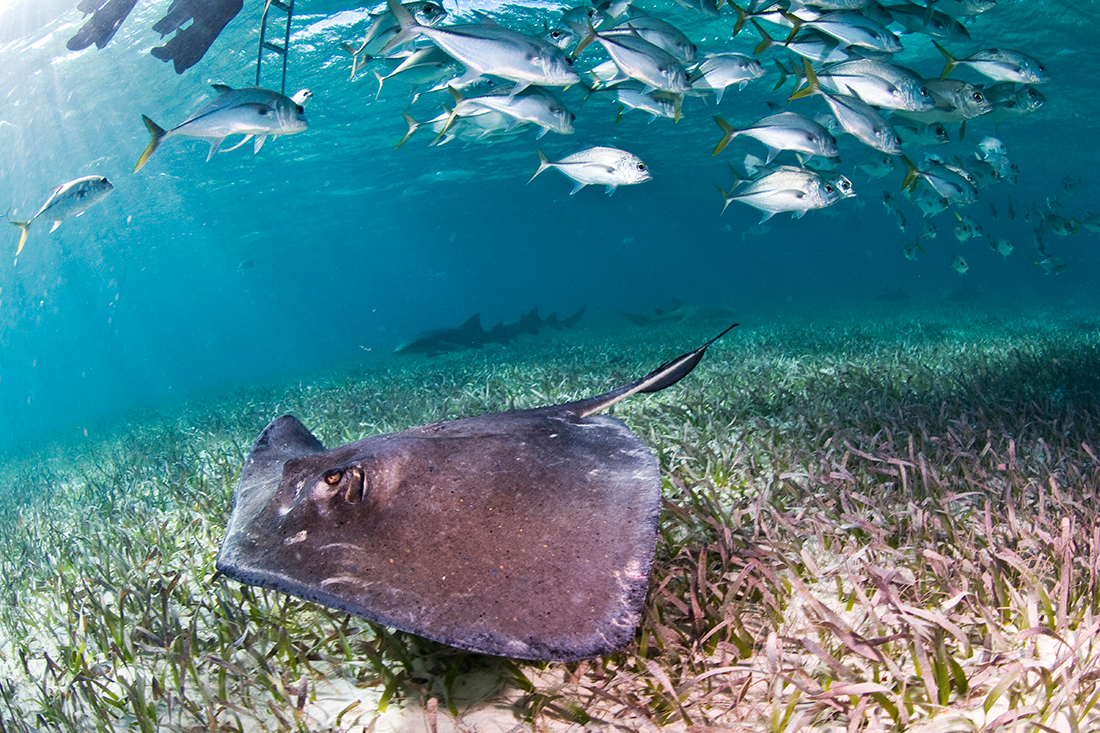 Thanks to their unique way of feeding, large bottom-dwelling rays – such as stingrays, cownose rays, or whiptail rays – act as “habitat engineers”. Hovering over sandy areas, they excavate the sand in search of food while simultaneously creating micro-habitats for various tiny invertebrates. For these “architects”, sharing is caring! As they uncover tasty snacks for themselves, they also help many other marine species to feed, from small reef fishes, to bigger predatory jacks, all the way to seabirds such as cormorants. 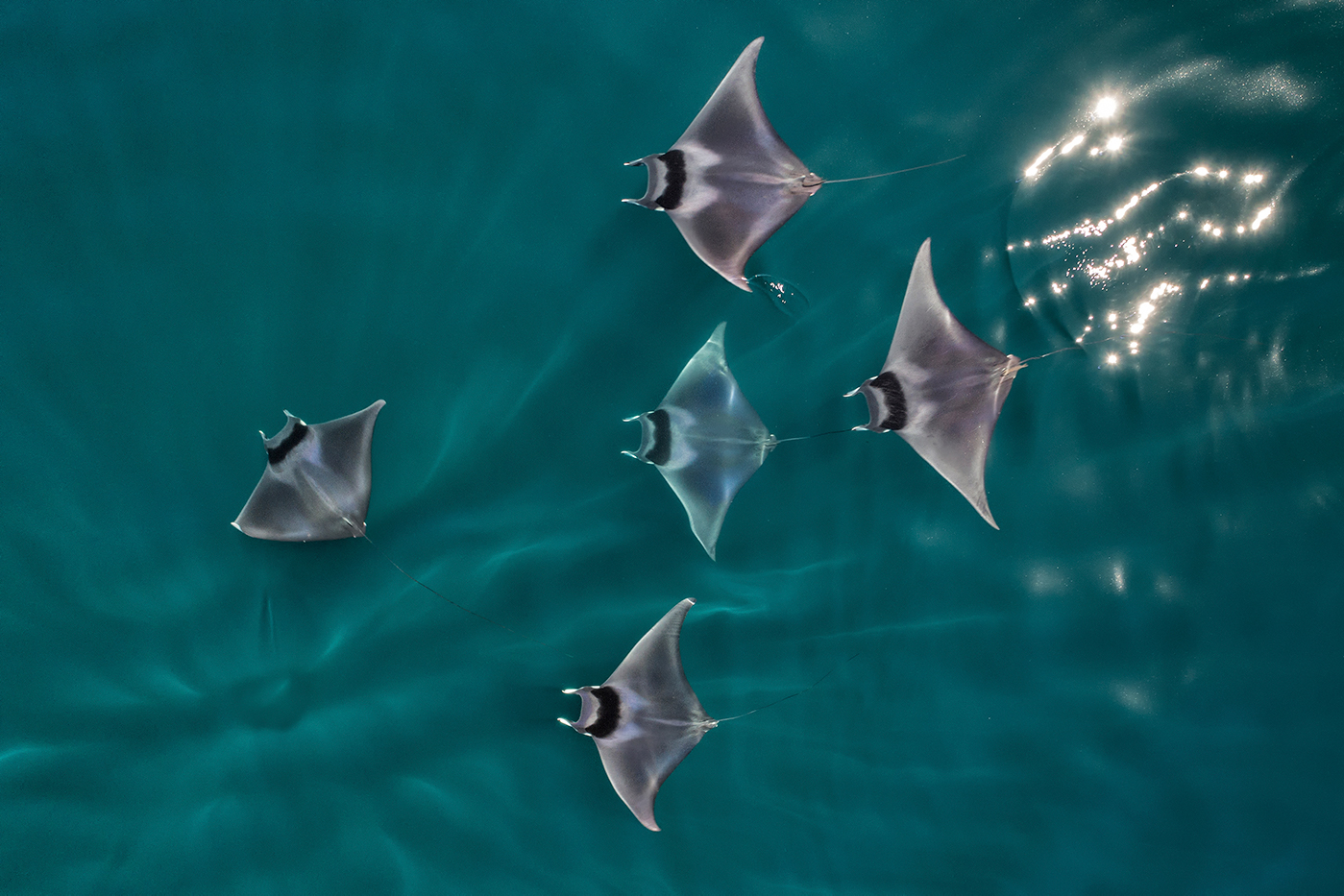 Large, deep-diving sharks and rays help phytoplankton (microscopic marine plants) to grow, simply by cruising between ocean depths and the shallows. One species of open-ocean mobula ray was found to dive to almost 2,000 metres – nearly 2.5 times more than the height of the tallest building in the world! These creatures dive down to feed and as they return to the surface, they defecate, bringing back crucial nutrients. Without those essential elements, phytoplankton – which forms the foundation of many oceanic food chains – couldn’t grow! And you know what is responsible for every second breath you take? Yes, phytoplankton as it produces half of Earth’s oxygen supply! So yes, some rays and sharks really are deep-diving gardeners that help us breathe… 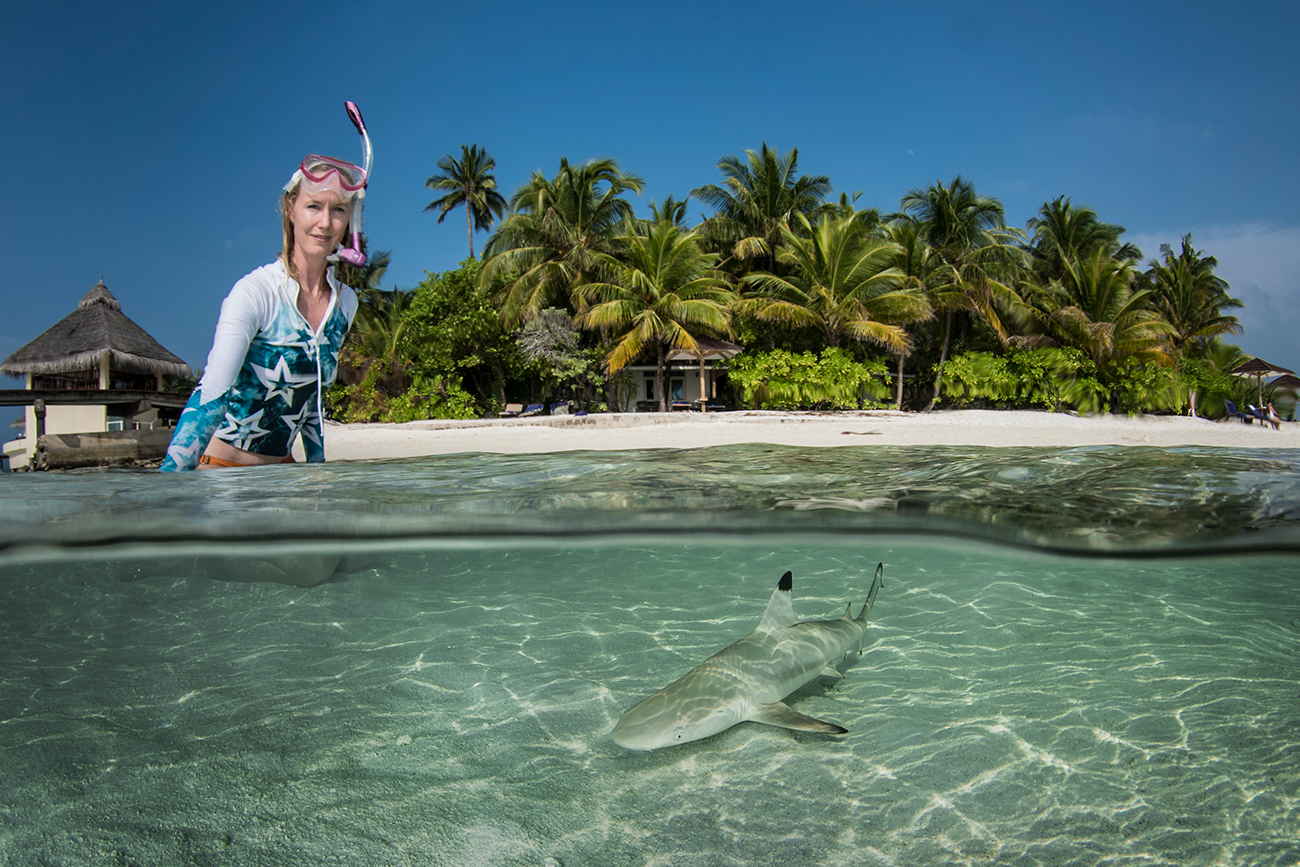 Just as nature-loving tourists all around the world dream of seeing elephants, lions, or gorillas in the wild, many cannot imagine their lives without swimming with sharks and rays under water! Every year around 600,000 shark divers travel the world to witness these magnificent creatures in their natural surroundings. In 2014 in Australia alone, shark tourism brought at least AU$47m to the national economy. The economy of Maldives – a small island nation in South Asia – is driven by tourism, with diving and snorkelling as the country’s most popular tourist activity. Shark divers brought over US$65m to their local economy in 2016, contributing directly to the diving industry and many other business sectors. A tourism survey revealed that 74% of travellers came to Maldives because of diving and devoted shark divers said that they would not return if there were no live sharks to be seen! 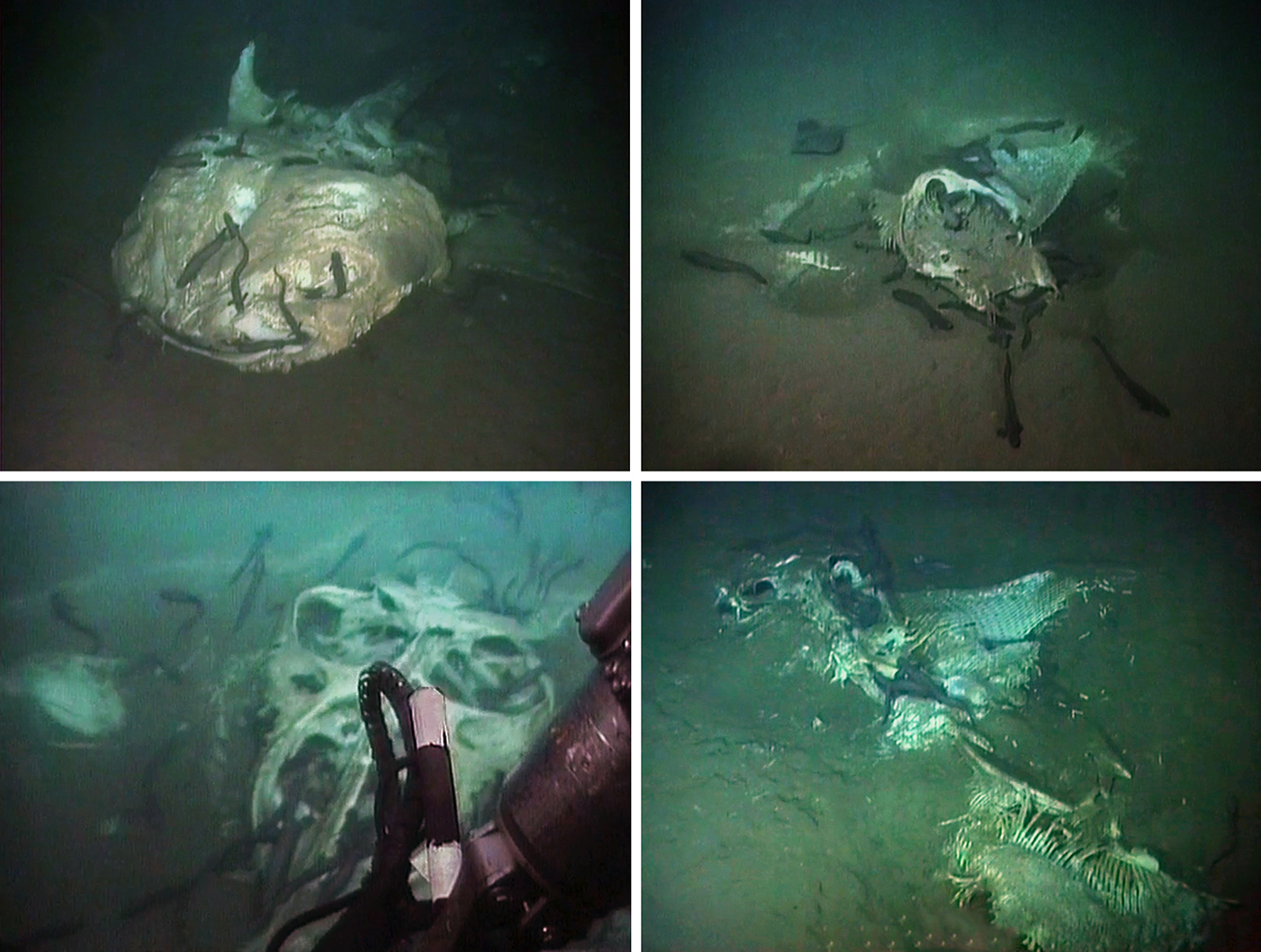 Even after they die of natural causes, sharks and rays contribute so much to the marine ecosystems! Scientists analysing video footage from the seafloor off Angola’s coast discovered that carcasses of a dead whale shark and large rays resting peacefully at 1,200 metres supported entire communities of deep-sea scavengers. A real blue circle of life!

No longer the immortal superheroes...

Now you see how amazing sharks and rays really are! Sadly, up to 100 million are killed every single year, whether caught on purpose or by accident (as bycatch). Overfishing and lack of controls are driving declines of sharks and rays on a global scale. As a result, 30% of all 1,200+ species are currently threatened with extinction. Without urgent action and our help, some of these blue super-heroes – which have been around for hundreds of millions of years, outliving the dinosaurs – might disappear for ever… Let’s not let that happen! Your daily lives affect these creatures far more than you would probably think, even if you live far from the ocean. Discover what you can do to help protect sharks and rays for millennia to come.