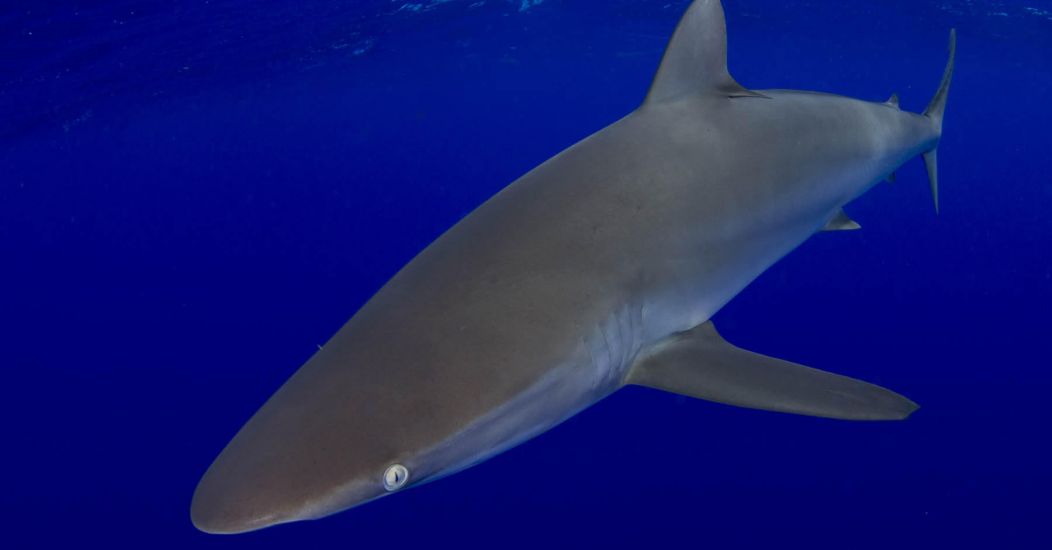 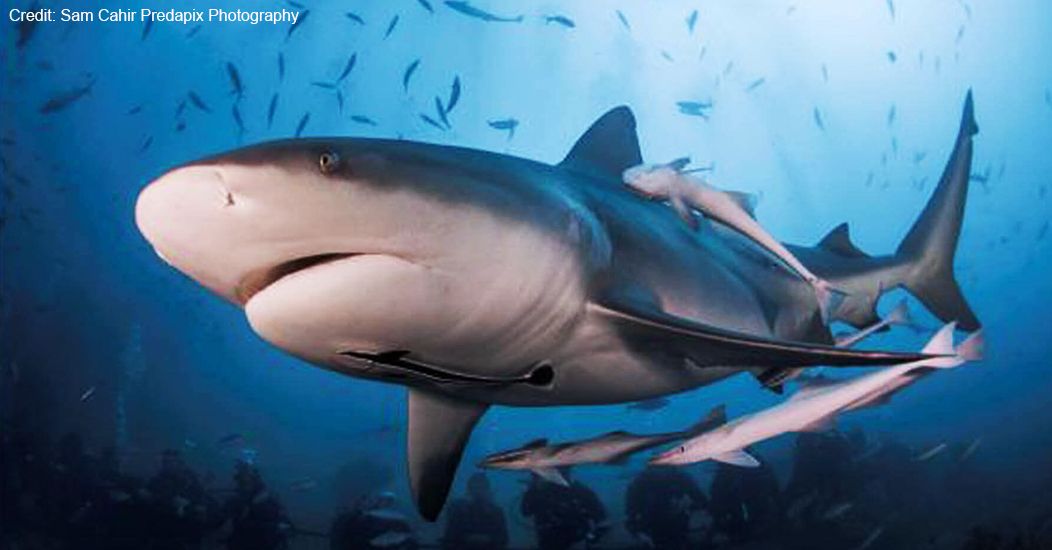 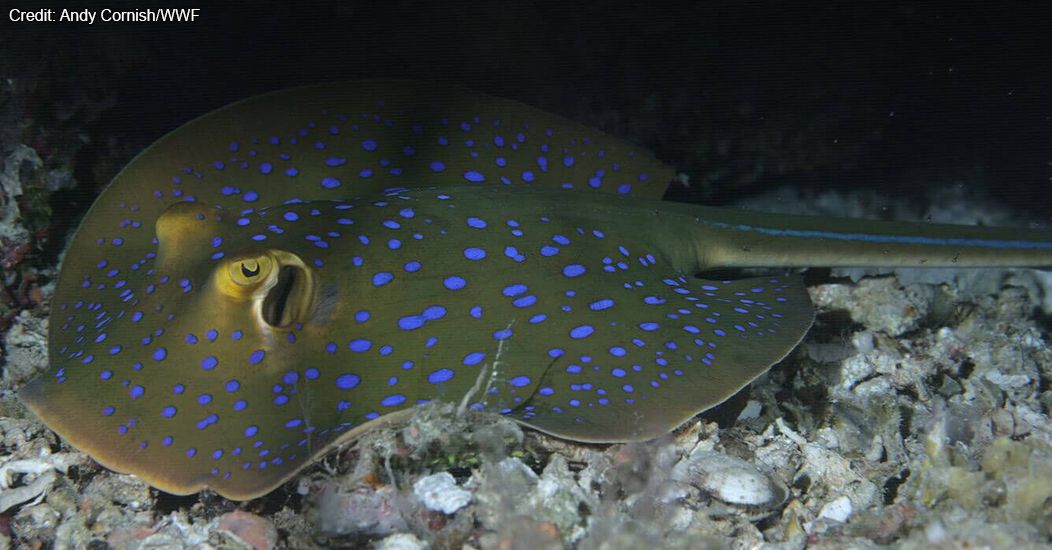 Pelagic or oceanic sharks live in the open waters of seas and oceans.

They inhabit tropical and temperate waters, and many are migratory. Pelagic sharks are constantly on the move, and rely on lift from their pectoral fins and buoyancy from the low density oils in their large livers to stop them from sinking.

Many pelagic sharks are the top predators in their range, and have few natural predators when fully grown. Pelagic sharks are carnivorous and mostly eat fish, including other sharks on occasion, and some will take turtles, seals and penguins. However, there are also three species of large plankton eating filter feeders – the whale shark, the basking shark, and the megamouth shark.

The diversity of pelagic sharks is quite low at 53 species, far less than the hundreds inhabiting shallow coastal regions. Yet many are abundant and found across very wide expanses of the world’s oceans.

What are the main threats to pelagic sharks?

Overfishing is the overwhelming threat, with open ocean longlines using hundreds if not thousands of hooks each catching the greatest volume of sharks globally. While these fisheries may be primarily targeting tuna and billfishes such as marlin, the sharks caught are an important source of income, particularly their fins. Tuna purse-seiners also catch sharks, although these have a better chance of being released alive, while gill nets are an ecological disaster, catching almost anything in their path, including whales, dolphins, turtles and sharks.

While the oceans are vast, there are few refuges from industrial fishing, and some pelagic species, such as the oceanic whitetip have suffered massive population losses due to their inability to reproduce more quickly. A recent study estimated that pelagic sharks and rays declined by 71% since the 1970s. Over 75% of these species are now threatened with extinction, with over half either endangered or critically endangered. 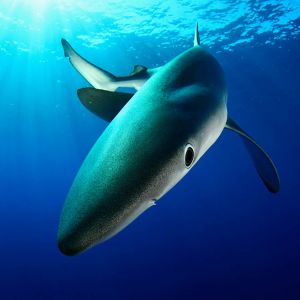 Blue sharks (Prionace glauca) are one of the most common, and widespread sharks. They are found in the open ocean, and along the coasts of every continent except Antarctica. They undertake great migrations to seek prey, and to reproduce. One female tagged in the Atlantic travelled an extraordinary 28,000 km in 2.7 years. Blue sharks feed mostly on small fishes and squid, and will occasionally kill seabirds.

Blue sharks grow to 3.8m long. Females reach reproductive age at around five to seven years, and typically have 15-30 live young. No other shark is as heavily fished as the blue sharks, which are caught for their fins and meat. Blue sharks are assessed as "Near Threatened" on the IUCN Red List of Threatened Species. 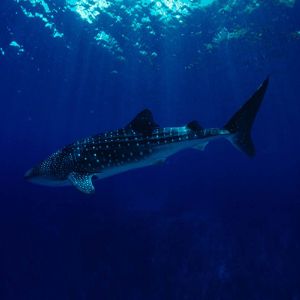 Whale sharks (Rhincodon typus) are the largest shark, and indeed largest of any fishes alive today. They feed on plankton and travel large distances to find enough food to sustain their huge size, and to reproduce. Whale sharks are found in all the tropical oceans of the world. Their white spotted colouration makes these gentle giants easy to distinguish, and popular with snorkelers and divers at sites where they aggregate off the coast.

The maximum size of whale sharks is not known, but could be as large as 20m. Females give birth to live young but this has never been observed. Where pupping occurs and where the youngest animals situate remains a mystery, as they are very rarely found. Adults are often found feeding at the surface, but may dive to 1000m. Whale sharks are protected from fishing in many countries these days, but are in decline in some areas. This species is assessed as "Endangered" on the IUCN Red List of Threatened Species. 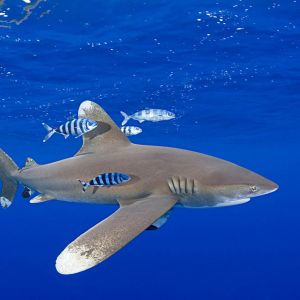 The oceanic whitetip sharks (Carcharhinus longimanus), with its rounded pectoral and dorsal fin and white tips, is a top predator of the open tropical oceans. It mostly feeds on bony fishes, and squid, but will also eat turtles, stingrays and even seabirds.

Oceanic whitetip sharks grow to around 3.5m, and had been the most abundant sharks in tropical oceans. However, they are inquisitive and easy to catch, and their large fins fetch a high price for shark fin soup. Populations have plummeted by over 90% in some offshore areas of the Pacific and Atlantic due to overfishing by industrial fishing fleets. While there are some bans on catching oceanic whitetips on the high seas, far more needs to be done. Oceanic whitetip sharks are assessed as "Critically Endangered" on the IUCN Red List of Threatened Species.

The species featured here are found primarily in tropical waters. Some have home ranges of only a few square kilometres, while others wander more widely into other habitats found on continental shelves, into deep waters, and even across the open ocean to reach reefs elsewhere.

Large reef sharks are typically the top predators on tropical reefs. On pristine coral reefs, they can account for as much as 50 per cent of all the fish biomass. All reef sharks are predators, typically hunting for fish, crustaceans, and other animals such as octopus. Some species are constantly on the move, while others spend much of their time lying on the bottom, and may feed mostly after the sun sets.

What are the main threats to reef sharks?

Overfishing is by far the biggest threat, while damage to reefs and other key habitats is also having an impact. The clearance of mangroves has a negative impact on species whose young use these as nursery grounds. The loss of living coral reefs due to sedimentation and fertilizer run-off from farmland, and climate change, will often reduce the amount of prey for sharks. Many kinds of food fishes that humans like to eat inhabit reefs, and so reefs are targeted by fishers, using types of fishing gear that also catch sharks.

Around 30% of all 482 sharks and rays inhabiting coastal and continental shelves, which includes all reef sharks, are threatened with extinction. Recent research (2020) revealed that reef sharks were functionally extinct in nearly 20% of surveyed reefs around the world.

Whitetip reef sharks (Triaenodon obesus) are often found in caves and resting on the seabed by day, becoming more active at night. Widespread on reefs in the tropical Indian and Pacific Oceans, these reef sharks occur from the surface to at least 300m depth.

This species typically searches crevices by night looking for the octopus, crustaceans and reef fishes that it feeds on. Whitetip reef sharks reach sexual maturity at 7-8 years, and grow to around 1.6m. They only give birth to one to five young per litter, and while not valued for their fins or meat, are easily caught. Whitetip reef sharks are assessed as "Vulnerable" on the IUCN Red List of Threatened Species. 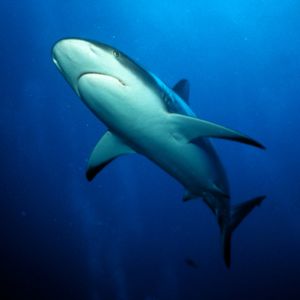 A once common shark on coral reefs in the Coral Triangle, Central Pacific and West Indian Ocean. A strong swimming species that likes areas with high currents, and well known to divers. The grey reef shark (Carcharhinus amblyrhynchos) feeds mostly on bony reef fishes, and also octopus, squid and crustaceans.

The maximum size of grey reef sharks is around 2.5m, with females being sexually mature at about half that length. They can live to 25 years and give birth to one to six young, after a gestation period lasting around one year. Grey reef sharks are vulnerable to fishing and have become very scarce across large areas of reefs, with heavy fishing pressure in some countries. Once common, grey reef sharks are assessed as "Endangered" on the IUCN Red List of Threatened Species. 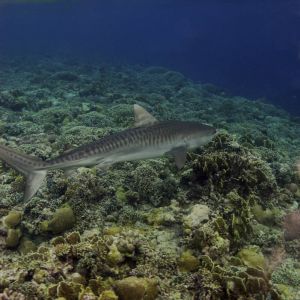 One of the largest and most distinctive predatory sharks, growing to at least 5.5m. Tagged tiger sharks (Galeocerdo cuvier) have undertaken long and often unpredictable migrations. This top predator occurs along the coasts of all the world’s tropical seas. While found on reefs, this species also visits estuaries and other habitats in search of food. Prey includes other sharks, rays, turtles, bony fishes, seabirds and marine mammals, live or dead.

Tiger sharks mature at 7-10 years and females give birth to 10-80 live young every two years or so. While not yet threatened with extinction, the fins of tiger sharks have a high value, and they are easy to catch. Tiger sharks have been assessed as "Near Threatened" on the IUCN Red List of Threatened Species.

Sharks, rays and skates are closely related and together form a group called the elasmobranchs.

Rays first appear in the fossil record about 200 million years later than the first sharks, and are thought to have evolved from flattened shark species. One of the most obvious differences with sharks is that the pectoral fins of rays and skates form a large disc, which starts from the back of the skull.

There are over 600 species of rays and skates, inhabiting reefs, the open ocean, the deep sea and even freshwater.

What are the main threats to rays?

Overfishing is the largest threat to rays in the marine realm, as it is for most sharks. Some of the most valuable fins in the fin trade come from shark-like rays, such as sawfishes and large guitarfishes. Meat of many species of rays and skate is also eaten by coastal communities.

Rays are more threatened than previously thought, and are in fact doing even worse than sharks. Two out of three elasmobranch species classified as "possibly extinct" are rays, and five out of the seven most threatened families in this group are also rays. 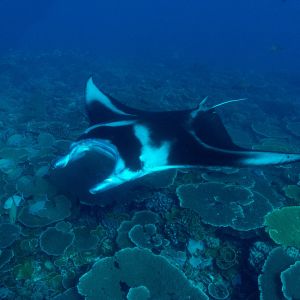 Giant manta rays (Mobula birostris) are impressive, graceful creatures, and the largest rays on the planet. Unlike many other rays, they do not lie on the seabed, but are adapted to swim continuously. They feed on plankton, undertake migrations across the open ocean, and are widely distributed. In certain coastlines, giant manta rays are predictable seasonal visitors, arriving to be cleaned by reef fishes, or aggregating in large numbers to feed or mate.

Areas where manta rays are predictably found can support dive tourism. While manta rays are fully protected in many countries, they are hunted in others for their large gill rakers, which are sold dried in southern China as a health tonic. As sub-populations often have less than 1,000 individuals, and females only produce one young per season, giant manta rays are extremely vulnerable to overfishing. Manta rays have never been observed giving birth, and only very rarely, mating. They are assessed as "Endangered" on the IUCN Red List of Threatened Species. 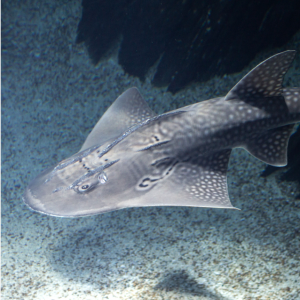 Bowmouth guitarfish (Rhina ancylostoma) are an uncommon but distinctive species of ray occurring in tropical waters from East Africa to Australia and Japan. They are found along coastlines and on offshore reefs to depths of around 100m. Bowmouth guitarfish feed on crabs and large shellfish, which they often eat whole.

This species is one of the largest guitarfishes, reaching 2.7m in length. The reproductive biology of females is poorly understood, while males reach sexual maturity when they reach 1.5 to 1.75m in length. Bowmouth guitarfish are mostly caught as bycatch, sometimes by bottom trawlers. There are also targeted fisheries in some Southeast Asian countries as the fins fetch high prices in the shark fin trade. The meat may also be locally consummed. Bowmouth guitarfish are assessed as "Critically Endangered" on the IUCN Red List of Vulnerable Species. 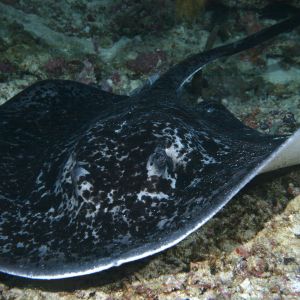 This species (Taeniurops meyeni) is one of the largest stingrays found on tropical coral and rocky reefs in the Indian and Pacific Oceans, and Red Sea. Blotched fantail rays are well known to recreational divers, and while normally found by itself, aggregations do form, probably for mating.

The largest blotched fantail rays reach 1.8m across the disc, and females give birth to live young already 30cm in disc size. The age of sexual reproduction and numbers of young produced by females is not known. While not targeted by fishers, this species does get caught by hook and line, gill net and trawl fisheries, and can be seen being sold for meat in Southeast Asian wet markets. Blotched fantail rays are assessed as "Vulnerable" on the IUCN Red List of Threatened Species.